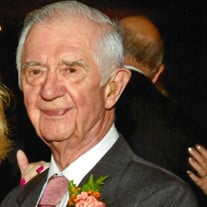 Paul William Sugg , age 97, of Maria Joseph Manor Continuing Care Community, Danville, PA, died on Friday, September 9, 2016, a patient of the Geisinger Medical Center, Danville. Paul was formerly of Bloomsburg; Zephyrhills, FL and Bowmansville, NY. Paul was born on Saturday, April 12, 1919 in Cheektowaga, New York, a son of the late George Martin and Gertrude Pauline (Kaufman) Sugg. Mr. Sugg was a 1937 graduate of Bishop Neumann High School, Williamsville, NY and the Hurst Business School in Buffalo. He served from 1942 to 1946 in the US Army 41st Infantry Division, Medical Corps. He was appointed Postmaster of Bowmansville, NY by President Harry S. Truman in 1946, serving until 1977. He was a life member of the Bowmansville Fire Hall and served as President for both the Erie County Postmasters' Association in New York and the National Association of Retired Federal Employees of Zephyrhills, FL. He enjoyed traveling and meeting with retired veterans' groups. Most recently, he was a member of St. Columba parish, Bloomsburg. He was a member of the Sacred Heart of Jesus Holy Name Society, Susquehanna Valley Retired Men's Club, the Columbia County World War II Veterans, and the Pennsylvania Blind Veterans' Association. He served as a Eucharistic Minister at his parish in Florida, at St. Columba parish and for the pastoral ministry at Geisinger Medical Center. As a young man, he kept carrier pigeons and enjoyed hunting. He was a fan of the Buffalo Bills. Paul was preceded in death by his son, Paul W. Sugg, Jr. in 1952 and his sisters, Rita Gibbs in 2006 and Gertrude McCormick in 2013. Survivors include his beloved wife of 70 years, Gloria Virginia (Scott) Sugg of Danville; three daughters: Laurinda B. Hoffer (Gilbert) of Blue Bell, PA. Dorette E. (Francis) Welk of Pittsburgh, PA, and Charleen R. Szabo (Robert deVesty) of Jupiter, FL; three grandsons: Paul (Courtney) Welk of Pittsburgh, John (Karen) Welk of Schuyler, VA, and Jeffrey (Kimberly) Welk of Sewickley, PA; seven great grandchildren: Sebastian, Sarah, Lilith, Ryan, Brady, Ethan, Tyler; four sisters: Irene Kasper of West Seneca, NY, Marilyn Malucci of Kenmore, NY, Jane Grodem of Batavia, NY, and Rosemary Hopcia of Alden, NY; and many nieces and nephews. Memorial Contributions are suggested to Sacred Heart Shrine, 5337 Genesee St., Bowmansville, NY, 14026 for its upkeep. Mr. Sugg contributed a stone for its construction when he was a small child and always had a devotion stemming from that experience. A Celebration of Life Mass will be held in the chapel of Maria Joseph Manor in Danville at a later date to be announced by the family. Final inurnment will be in the Sacred Heart of Jesus Cemetery in Bowmansville, NY. The Allen Funeral Home, Inc., 745 Market St. Bloomsburg, PA 17815 is honored to be serving the Sugg family.

The family of Paul W. Sugg created this Life Tributes page to make it easy to share your memories.

Send flowers to the Sugg family.