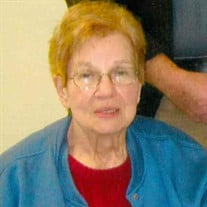 Norma I. Dent , age 86, of Catawissa, died on Friday, April 14, 2017, at her home surrounded by her family and under the care of Geisinger Columbia Montour Hospice. Norma was a resident of her Cleveland Township home in for over 63 years. Norma was born on Friday, January 23, 1931 in Hemlock Township, Columbia County, a daughter of the late William Avery and Hazel Applegate. Throughout her younger years, Norma attended the Bloomsburg area schools, and later graduated from the Bloomsburg High School in 1948. Norma expanded her education by attending Wilkes Barre Area Vocational Technical School and became a Licensed Practical Nurse. For many years, Norma was employed by the former Gold Star Nursing Home until her retirement in 1996. For most of her life, Norma a faithful member of the former St. Paul's United Methodist Chruch, Esther Furnace, which merged with Roaring Creek United Methodist Church. Norma loved animals, especially cats and she enjoyed restoring antiques. In addition to her parents, Norma was also preceded by her husband: W. Arthur Dent; a son: Lee Allan Dent; a sister: Gloria Haley and a granddaughter: Angela C. Conner. Survivors include three children: Yvonne M. Hess of Catawissa, Michael A. Dent of Catawissa, and Donald A. Dent (Ramona) of Castorland, NY: siblings: Shirley Kimsal (Robert) of Bloomsburg and, Franklin Dent (Dawn) of Catawissa; grandchildren: Jason M. Hess, Benjamin C. Dent, Briana E. Haas (Michael), Brandon M. Dent, Jessica E. Steffan (Mark), Eilleen C. Cuell (Oliver), Christopher Yacko, and Courtney M. Baker, and 5 great grandchildren. A time of Visitation for family and friends will be held on Wednesday, April 19, 2017 from 10:00 am to 11:00 am at the Allen Funeral Home, Inc., 745 Market at Eighth St., Bloomsburg. Funeral Services will begin on Wednesday, April 19, 2017 at 11:00 am with her pastor, Pastor Adam Miller, officiating. Graveside committal services will immediately follow in the New Rosemont Cemetery. The Allen Funeral Home, Inc., is honored to be serving the Dent family.

Norma I. Dent , age 86, of Catawissa, died on Friday, April 14, 2017, at her home surrounded by her family and under the care of Geisinger Columbia Montour Hospice. Norma was a resident of her Cleveland Township home in for over 63 years. Norma... View Obituary & Service Information

The family of Norma I. Dent created this Life Tributes page to make it easy to share your memories.

Send flowers to the Dent family.