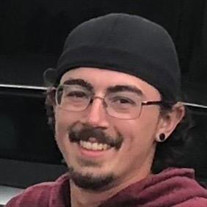 Nicholas James Albertson, age 23, of Bloomsburg, died on Monday, September 17, 2018, at Geisinger Medical Center in Danville and was surrounded by many loved ones. Nick was born on Monday, July 24, 1995 in Danville, a son of Dave R. Albertson of Orangeville and Brenda L. (McAllister) Albertson of Bloomsburg. Throughout his younger years, Nick attended the Bloomsburg area schools, and later graduated from the Columbia Montour Vocational Technical School in 2013, where he was enrolled in the building trades program. He was most recently employed by McCormick's Lawn & Landscaping, LLC, Danville. Nicholas was our boy "Nick Nick"...the legend. His guy friends wanted to be like him and his lady friends wanted to be with him. Nick loved fishing in Fishing Creek, hunting at "the farm", figure 8 racing, bull riding, fried carnival and fair food, his rust bucket mower that he recently purchased with big Pop, playing pool, bonfires and Captain Morgan, not necessarily in that order. His recent pride and joy was riding his 2018 street glide with Morgan and all of their friends. He was a social member of the Veterans of Foreign Wars Post #804, Bloomsburg as well as the National Rifle Association. We were blessed to learn many valuable lessons from Nick during his short 23 years. The most important one to hold dear is to live life to the fullest and let the glass overflow with good times and great stories. Nick was preceded in death by his maternal great grandparents; Harry "Dick" and Louise Carodiskey of Danville, paternal great grandmother Mary Hess and paternal great grandfather Reuben Albertson all of Orangeville. Along with his parents, survivors include his two sisters Zoey Albertson of Bloomsburg and Riley Albertson of Orangeville. Grandparents Dave and Jean Albertson of Orangeville, Vonnie McAllister of Danville, great grandmother Pauline Albertson of Orangeville and his companion Morgan Johnson of Orangeville. He was a nephew of Mike and Michelle Moletsky of Clarks Summit, Ed and Kelly Sanders of Lightstreet, Chris and Dot Diltz, Brian and Chris Yachimowski of Orangeville and Howard Albertson of Benton. He is also survived by many great aunts and uncles as well as numerous cousins. A time of Visitation for family and friends will be held on Sunday, September 23, 2018 from 1:00 pm to 4:00 pm at the Allen Funeral Home, Inc., 745 Market St., Bloomsburg. Arrangements are under the direction of The McMichael Funeral Home, Inc., Benton. A memorial service will be announced at a later date and burial will be at the convenience of the family. Memorial contributions in Nick's name are suggested to: The Nicholas Albertson Scholarship Fund created for graduates of Columbia Montour Vo Tech c/o Kelly Sanders, P O Box 116, Bloomsburg, PA 17815. Friends and family wishing to send a memorial gift, share a personal memory or offer condolences to the family, a Memorial Tribute Page in Nicholas’s honor and a Sympathy Store are available at www.Allen-FuneralHome.com or www.mcmichaelfuneralhome.com.

Nicholas James Albertson, age 23, of Bloomsburg, died on Monday, September 17, 2018, at Geisinger Medical Center in Danville and was surrounded by many loved ones. Nick was born on Monday, July 24, 1995 in Danville, a son of Dave R. Albertson... View Obituary & Service Information

The family of Nicholas James Albertson created this Life Tributes page to make it easy to share your memories.

Send flowers to the Albertson family.