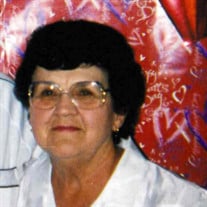 Nancy L. Bowman, age 90, of Bloomsburg, passed away on Tuesday, May 12, 2020, at Brookdale Assisted Living of Bloomsburg. Nancy was a resident of her home in Scott Twp. for over 59 years. She was born on Saturday, August 31, 1929 in Wilkes-Barre, a daughter of the late Delbert J. and Eulah M. (Boone) Spiegel. Nancy graduated from the former Scott Twp. High School in 1947. On December 19, 1947, Nancy married her loving husband, Richard M. "Dick" Bowman, who preceded her in death on September 30, 2010. Nancy and Dick operated Bowman's French Fry Stand for 71 years at The Bloomsburg Fair as well as many other fairs throughout the country. For many years, Nancy was employed at Central Columbia School District as a teacher's aide until her retirement. Nancy was a huge fan of Penn State Football and the Philadelphia Phillies. She enjoyed golfing and fishing with family, traveling to Florida in the winter months and especially enjoyed attending the sporting events of her grandchildren and great grandchildren. In addition to her parents and husband, Nancy was also preceded in death by a sister, Jane Steinruck, and a brother, Dale Spiegel. Survivors include her two beloved daughters; Sharon Seesholtz of Bloomsburg, Becky wife of Thomas Hess of Bloomsburg, four grandchildren, Kirk Sheesholtz and wife Kara of Mifflinville, Lance Seesholtz and wife Nikki of Bloomsburg, Shelly wife of Bill Thomas of Harrisburg, Brady Hess and fiancee Kelly Baker of Numidia, eight great grandchildren, Ky Seesholtz, Koy Seesholtz, Eli Seesholtz, Evan Seesholtz, Logan Hess, Brodey Hauer, Braegen Thomas, Scarlett Thomas, and a sister, Harriet wife of Jay Hock of Orangeville. Due to the recent events and the current CDC guidelines, funeral services will be held privately for the family with graveside services to be held in Laurel Hill Cemetery, Orangeville. Nancy's family apologizes for restricting her family and friends from paying respects at this time. The Allen Funeral Home, Inc., 745 Market at Eighth Streets, Bloomsburg is honored to be serving the Bowman family. Memorial contributions in Nancy's name are suggested to: The American Heart Association, 1704 Warren Ave., Williamsport, PA 17701.

Nancy L. Bowman, age 90, of Bloomsburg, passed away on Tuesday, May 12, 2020, at Brookdale Assisted Living of Bloomsburg. Nancy was a resident of her home in Scott Twp. for over 59 years. She was born on Saturday, August 31, 1929... View Obituary & Service Information

The family of Nancy L. Bowman created this Life Tributes page to make it easy to share your memories.

Send flowers to the Bowman family.