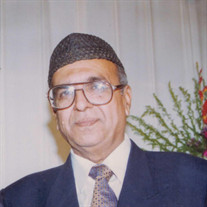 Mohamed Yousuf Ahmed, age 81, of Danville, died on Friday, October 1, 2021, a patient of the Geisinger Medical Center in Danville. Yousuf was born on June 15, 1940 in Nanded, India. Yousuf was most recently part of the Sunbury Islamic Center Community, of which he was a devout member. In the many travels and adventures of his life he was part of Islamic Lecturing groups, and he had donated his vast collection of Islamic books to Madrasas. He was also part of a group of physicians chosen to care for a factory in Nigeria for many years as well. A lover of arts and poems, Yousuf was also a Librarian in Hyderabad simply for the sake of books. Yousuf was an avid traveler and has visited many countries and states in his time; which includes almost all 50 states, Pakistan, Nigeria, Saudi Arabia and more. Yousuf was a true Renaissance man in the sense that although he was scientifically inclined and an accomplished physician and professor, he was also a very talented calligrapher, writer and poet. In fact he wrote and published a book about his family's history in India. Amongst his many degrees includes agriculture, library sciences, medicine, and even a Master's in Arts. His main interests were educating himself in Islamic History and studying translations of Quran and Hadith. He was truly a scholar of Islam in his later life. In his downtime, he always enjoyed a sweet treat and classical music he had amassed a room full of his favorites. Yousuf Ahmed lived truly an amazing life. He was a man that traveled the world and became a scholar as well as an artist. An eloquent speaker well versed in many subjects his education varied from medicine to library science and agriculture. Yousuf had a passion for learning as much as he could on his own, he spent many of his last days teaching himself Islamic history. Yousuf pursued this by challenging himself by studying and translating the Quran and original Hadith on his own. Besides his intellectual gifts, Yousuf was a family man first, and is currently survived by his wife Qutub Unnisa, 3 sisters, 2 brothers, 6 sons, 2 daughters, 25 grandchildren and 1 great granddaughter. He was at peace in his final days and spent his time saying goodbye to all his loved ones. He mentioned many times that he lived a good life and this was all due to God. His very final moment was spent praying a reflection on all the wonderous gifts that God had allotted him in this life. We all eagerly wait to meet him again, God Willing. Funeral services were held on Tuesday, October 5, 2021 at 1:00 pm at the Sunbury Islamic Center. Graveside committal services followed in Wildwood Cemetery, Williamsport. The Allen Funeral Home, Inc., 745 Market at Eighth streets, Bloomsburg is honored to be serving the Ahmed family.

Mohamed Yousuf Ahmed, age 81, of Danville, died on Friday, October 1, 2021, a patient of the Geisinger Medical Center in Danville. Yousuf was born on June 15, 1940 in Nanded, India. Yousuf was most recently part of the Sunbury Islamic... View Obituary & Service Information

The family of Mohammed Y. Ahmed created this Life Tributes page to make it easy to share your memories.

Send flowers to the Ahmed family.