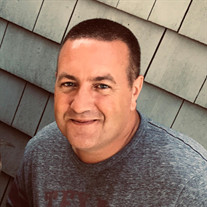 Michael S. Farr, age 43, of Danville, passed away on Friday, June 28, 2019, at the Geisinger Medical Center, Danville. Michael was a resident of his Valley Township home in Danville. He was born on Sunday, April 25, 1976 in Bloomsburg, a son of Shirley (Young) Hack and his stepfather Robert Hack of Bloomsburg and the late John Farr and his stepmother Beverly Farr of Millville. Throughout his younger years, Michael attended the Millville area schools, and later graduated from the Millville High School in 1994. Following graduation, Michael enlisted in the United States Marine Corps. He was recipient of the Sea Service Deployment Ribbon, the National Defense Service Ribbon, eight Letters of Appreciation, two Certificates of Commendation and the Good Conduct Medal. He was honorably discharged on July 25, 2000. For over 18 years he was employed by Danville State Hospital as a Maintenance Foreman of the Carpentry Shop. On February 19, 1996, Michael married his loving wife, the former Darla Baylor, formerly of Catawissa. Michael was a member of the Danville Moose. He enjoyed spending his time hunting, fishing, trapping, bee keeping, and making maple syrup. He was a gifted craftsman in various materials, a Bar B Q pit master, and was a Central Susquehanna Soccer Club Coach. Survivors include his beloved wife, Darla Farr of Danville, his two sons; Gavin M. Farr and Will B. Farr, his mother, Shirley Hack and stepfather Robert Hack of Bloomsburg, stepmother, Beverly Farr of Millville, a brother, Christopher P. Farr and wife, Caroline, of Lightstreet, two sisters, Jamie Hack and companion Neil Streeter of Danville and Bridget Brickley and husband, Chad of Hershey, along with many adoring nieces and nephews. Funeral Services will begin on Saturday, July 20, 2019 at 2:00 pm at the Millville High School auditorium, 345 School House Lane, Millville with The Rev. Dr. Robert J. Andrews, officiating. Military honors will be provided by a combined American Legion and V.F.W. contingent. The Allen Funeral Home, Inc., 107 West Main at Railroad Streets, Millville is honored to be serving the Farr and Hack families. Memorial contributions in Michael's name are suggested to: The education fund for the "Team Farr Boys" c/o Darla Farr 247 Hess Hill Road, Danville, PA 17821. Friends and family wishing to send a memorial gift, share a personal memory or offer condolences to the family, a Memorial Tribute Page in Michael’s honor and a Sympathy Store are available at www.Allen FuneralHome.com.

Michael S. Farr, age 43, of Danville, passed away on Friday, June 28, 2019, at the Geisinger Medical Center, Danville. Michael was a resident of his Valley Township home in Danville. He was born on Sunday, April 25, 1976 in Bloomsburg,... View Obituary & Service Information

The family of Michael S. Farr created this Life Tributes page to make it easy to share your memories.

Send flowers to the Farr family.