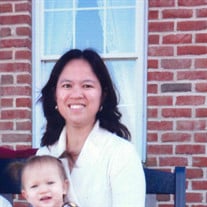 Melissa Ngoc Cam "Misi" Wagner, age 43, of Danville, died on Tuesday, June 6, 2017, at her home, surrounded by her loving family and under the care of Columbia Montour Hospice. Misi was a resident of her home in Hemlock Township for over 20 years. Melissa was born on Saturday, October 27, 1973 in Vietnam, she was the daughter of Clyde R. Neeb (Sandra) and Betty (Long) Tedesco (John "Butch") both of Bloomsburg. Throughout her younger years, she attended Central Columbia schools, and later graduated from the Central Columbia High School in 1991. Misi then attended Millersville University, and graduated with honors in 1995. She was a dual major student in Special Education and Elementary Education. On June 28, 1997, Melissa married her loving husband, Matthew S. Wagner. For over 18 years, Melissa was employed by Millville School District as an Elementary Teacher. Previously she taught in the Berwick, Benton and Danville schools. Melissa was an active member of the Bloomsburg Christian Church, where she served on the church hospitality committee, assisted with VBS and she taught Sunday School. Survivors include her beloved husband of 19 years, Matthew S.Wagner; two daughters: Emma So Yon Wagner and Katie Ngoc Cam Wagner; mother: Betty Tedesco (John "Butch") of Bloomsburg; father: Clyde R. Neeb (Sandra) of Bloomsburg; six siblings: Sue Thomas of Numidia, Angela Wells (James) of Bloomsburg, Holly Kasper (Danny) of Shamokin, Steven Girton (Nikki) of Bloomsburg, Michael Neeb (Suzanne Anderson) of Jackson, NJ, and Ryan Girton (Monique) of Allen, TX. A time of Visitation for family and friends will be held on Friday, June 9, from 4 pm to 6 pm at the Bloomsburg Christian Church, 107 Deussen Drive, Bloomsburg. Friends and family will also be received on Saturday from 9 to 10 am at the church. Funeral Services will begin promptly at 10 am with her pastor, Eric Miller, Lead Minister of Bloomsburg Christian Church, officiating. Graveside committal services will follow in the Pine Hill Cemetery, Elysburg. The Allen Funeral Home, Inc. is honored to be serving the Wagner family. Memorial contributions in Melissa's name are suggested to: Bloomsburg Christian Church, 107 Deussen Drive, Bloomsburg, PA 17815. For friends and family wishing to send a memorial gift, share a personal memory or offer condolences to the family, a Memorial Tribute Page in Melissa’s honor and a Sympathy Store are available at www.Allen FuneralHome.com.

Melissa Ngoc Cam "Misi" Wagner, age 43, of Danville, died on Tuesday, June 6, 2017, at her home, surrounded by her loving family and under the care of Columbia Montour Hospice. Misi was a resident of her home in Hemlock Township for over 20... View Obituary & Service Information

The family of Melissa N. "Misi" Wagner created this Life Tributes page to make it easy to share your memories.

Send flowers to the Wagner family.