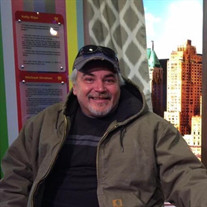 Matthew C. Harter, age 55, of Benton, passed away unexpectedly on Tuesday, June 2, 2020. Matt was a resident of his home in Benton for over 6 years and previously lived in Bloomsburg. He was born on Sunday, May 23, 1965 in Berwick, a son of the late Delmar W. and Lillian L. (Force) Harter. Matt graduated from Columbia Montour Vo-Tech in 1983 and he expanded his education by graduating from Triangle Technical School, Sunbury. For many years, Matt was employed by Cheetah Chassis, Berwick and later at ACF, Milton, as a welder. He was a member of Trinity United Methodist Church, Espy. Matt enjoyed spending his time hunting and fishing with his father and being at the cabin with other family members. He also enjoyed cookouts and family events. He was a fan of NASCAR and football, cheering for the Philadelphia Eagles, win or lose. He had an interest in history and especially enjoyed spending time with his daughter, Megan. He was diagnosed in September, 2019 with Stage 4 lung cancer, however he always kept a positive attitude and a fighting spirit, in spite of his diagnosis. Survivors include his beloved daughter, Megan F. wife of Benjamin Messimer of Milton; two sisters, Frances L. wife of David McConnell of Hughesville, Carol Ann Klinger wife of Dennis Cole of Berwick, two brothers, Jay Harter and wife Cathy of Hallstead, Robert Harter and wife Dawn of Wapwallopen; along with numerous nieces and nephews. A time of visitation for family and friends will be held on Sunday, June 7, 2020 from 3:00 pm to 5:00 pm at the Allen Funeral Home, Inc., 745 Market at Eighth Streets, Bloomsburg. Funeral services will begin on Monday, June 8, 2020 at 10:00 am at the Allen Funeral Home, Inc. with family friend and Lay Speaker Sandy Stefanovige, officiating. Graveside committal services will immediately follow in Elan Memorial Park, Lime Ridge. The Allen Funeral Home, Inc., is honored to be serving the Harter family. Memorial contributions in Matt's name are suggested to: American Cancer Society (Nana's Angels Team), 1948 East Third St., Williamsport, PA 17701 or Trinity United Methodist Church, 2351 Old Berwick Road, Bloomsburg, PA 17815.

Matthew C. Harter, age 55, of Benton, passed away unexpectedly on Tuesday, June 2, 2020. Matt was a resident of his home in Benton for over 6 years and previously lived in Bloomsburg. He was born on Sunday, May 23, 1965 in Berwick,... View Obituary & Service Information

The family of Matthew C. Harter created this Life Tributes page to make it easy to share your memories.

Send flowers to the Harter family.