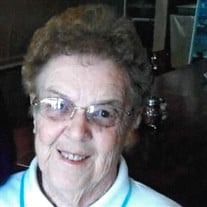 Mary Anna Williams, age 88, of Bloomsburg, passed away Tuesday, December 31, 2019, at her home. Mary Anna was a resident of Bloomsburg most of her life. She was born on Monday, June 8, 1931 in Bloomsburg, a daughter of the late William B. and Ethel B. (Fawber) Edgar. Throughout her younger years, Mary Anna attended the Bloomsburg area schools, she was a member of the class of 1949. For most of her retirement years, Mary Anna was employed by Central Columbia School District as a school van driver. She had previously worked at U.S. Radium Plant, Bloomsburg, she also managed Williams Shoe Repair, Bloomsburg with her late ex-husband, Wayne Williams and was also a waitress at the American Legion, Bloomsburg. Mary Anna loved going to yard sales and talking with all of her friends on the phone. In addition to her parents, Mary Anna was also preceded in death by her companion, Delmar B. Chaffee on May 7, 2010, a son, Scott J. McAnall, a daughter, Beth S. McAnall, a brother, Doyle W. Edgar, two sisters, Rhoda Richenderfer and Naomi Whitchey. Survivors include her daughter, Stacy L. wife of Joseph Semborski of Bloomsburg, two grandchildren, Sara Maria Semborski of Los Angeles, CA, and Eric Semborski and wife Kaitlyn of Fort Washington, PA, several nieces and nephews including, William "Bill" Edgar and wife Pam and David Edgar and wife Michele, also a sister-in-law, Kathryn G. Edgar, all of Bloomsburg. A time of visitation for family and friends will be held on Monday, January 20, 2020 from 12:00 noon to 1:00 pm at the Allen Funeral Home, Inc., 745 Market at Eighth Streets, Bloomsburg. Funeral Services will begin on Monday, January 20, 2020 at 1:00 pm at the Allen Funeral Home, Inc. with Rev. R. Christian Dunlap, officiating. Graveside committal services will immediately follow in New Rosemont Cemetery, Bloomsburg. The Allen Funeral Home, Inc., is honored to be serving the Williams family. Memorial contributions in Mary Anna's name are suggested to: Commonwealth Home Health and Hospice of Berwick, 1409 N. Market St., Berwick, PA 18603.

Mary Anna Williams, age 88, of Bloomsburg, passed away Tuesday, December 31, 2019, at her home. Mary Anna was a resident of Bloomsburg most of her life. She was born on Monday, June 8, 1931 in Bloomsburg, a daughter of the late William... View Obituary & Service Information

The family of Mary Anna Williams created this Life Tributes page to make it easy to share your memories.

Send flowers to the Williams family.