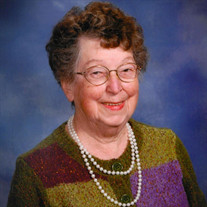 Mary D. Walburn, age 91, of Bloomsburg, passed away on Friday, May 14, 2021, a resident of Grandview Health and Rehabilitation Center, Danville. Mary was a resident of Bloomsburg for over 40 years. She was born on Tuesday, December 3, 1929 in Catawissa, a daughter of the late Earl and Lena (Wheeler) Hampton. Mary graduated from the former Ralpho Twp. High School in 1948, and attended Bloomsburg State Teachers College. For over 15 years, Mary was employed by Bloomsburg University in the Community Activities Office, until her retirement in 1993. She was previously employed as a cook at The Bloomsburg Elks Club, a sales representative for Sears, Roebuck and Co., and at the former Emenee Shirt Factory, Catawissa. Mary was a very active member of The First Reformed United Church of Christ, Berwick, where she served on the Consistory, as well as many activities committees. She was also a member of the Quilters in Bloom and a volunteer at Raymond B. Winter State Park, Mifflinburg. Mary enjoyed spending her time listening to music, singing, playing piano and the organ, she enjoyed pop music, hymns and traditional songs. She loved cooking, baking, canning and preserving, her flower and vegetable gardens, fishing and family outings to the beach, reading novels and newspapers, quilting, sewing and hand crafts. Mary dearly loved her cats; Puss, Boots, Ginger, Toby and Abbie. Mary was the best ever mom, grandmom, and great grandmom. In addition to her parents, Mary was also preceded in death by her first husband, Joseph J. Haladay in March, 1971, her second husband, Kenneth L. Walburn on December 26, 2010, a step son, Richard Walburn, a brother, William Hampton and a sister-in-law, Joan Hampton. Survivors include her daughter, MaryAnn S. Haladay-Bierly and husband David of Elysburg, a step-daughter, Donna Ripa and husband Jacob of Hazleton, step-son, Edward Walburn of Hazleton, two grandchildren, Aaron Bierly, Jessica Deluccia and husband Todd, a great-granddaughter, Brook Deluccia, five step-grandchildren, Bree Pohida, Domenico Ripa, Kirstin Walburn, Shannon Walburn, Brandy Walburn, two nephews, William Hampton, and Brian Hampton and wife Allison. A time of visitation for family and friends will be held on Tuesday, May 18, 2021 from 10:00 am to 11:00 am at the Allen Funeral Home, Inc., 745 Market at Eighth Streets, Bloomsburg. Funeral services will begin on Tuesday, May 18, 2021 at 11:00 am at the Allen Funeral Home, Inc. with Pastor Gary M. Barraco, officiating. Graveside committal services will immediately follow in All Saints Cemetery, Elysburg. The Allen Funeral Home, Inc., is honored to be serving the Walburn family. Memorial contributions in Mary's name are suggested to: First Reformed United Church of Christ, 301 W. Second St., Berwick, PA 18603.

Mary D. Walburn, age 91, of Bloomsburg, passed away on Friday, May 14, 2021, a resident of Grandview Health and Rehabilitation Center, Danville. Mary was a resident of Bloomsburg for over 40 years. She was born on Tuesday, December... View Obituary & Service Information

The family of Mary D. Walburn created this Life Tributes page to make it easy to share your memories.

Send flowers to the Walburn family.