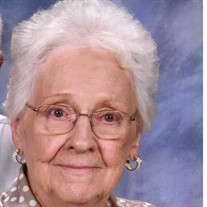 Marilyn Irene Blewett , age 88, of Berwick and formerly of Fowlersville Road, Bloomsburg died on Sunday, October 15, 2017, at her residence. Marilyn was a resident of her home in Berwick for six years. She was born on Monday, October 14, 1929 in Newark Valley, NY, a daughter of the late Charles and Jessica (Johns) Keyes. Throughout her younger years, Marilyn attended the Newark Valley area schools, and later graduated from the Newark Valley High School. Marilyn was preceded in death by her loving husband, Willliam C. Blewett Sr. on April 20, 2014. For over 20 years Marilyn was employed at Bloomsburg University as Food Service Manager until her retirement in 1982. She was a member of the First English Baptist Church, Bloomsburg. Marilyn enjoyed spending her time doing crossword puzzles, traveling to see fall foliage and socializing with friends and family. In addition to her parents and husband, Marilyn was also preceded by son in law, Gregory H. Cooper, daughter in law, Mary Ann Blewett, two brothers, Charles Keyes, Morley Keyes and a sister, Marjorie VanNess. Survivors include a daughter, Cathy L. Cooper of Danville, three sons, William C. Blewett, Jr. and wife Cheryl of Bloomsburg, Jon C. Blewett and wife Terry of Berwick, Dennis D. Blewett and wife Tina of Bloomsburg, 10 grandchildren and 5 great grandchildren. A time of visitation for family and friends will be held on Thursday, October 19, 2017 from 10:00 am to 11:00 am at the Allen Funeral Home, Inc. in Bloomsburg. Funeral services will begin on Thursday, October 19, 2017 at 11:00 am at the Allen Funeral Home, Inc. with Pastor Jess Shingler, officiating. Graveside committal services will immediately follow in the New Rosemont Cemetery. The Allen Funeral Home, Inc., is honored to be serving the Blewett family. Memorial contributions in Marilyn's name are suggested to: Erwine Home Health and Hospice 270 Pierce St., Suite 101, Kingston, PA 18704. Friends and family wishing to send a memorial gift, share a personal memory or offer condolences to the family, a Memorial Tribute Page in Marilyn’s honor and a Sympathy Store are available at www.Allen FuneralHome.com.

Marilyn Irene Blewett , age 88, of Berwick and formerly of Fowlersville Road, Bloomsburg died on Sunday, October 15, 2017, at her residence. Marilyn was a resident of her home in Berwick for six years. She was born on Monday, October 14, 1929... View Obituary & Service Information

The family of Marilyn Irene Blewett created this Life Tributes page to make it easy to share your memories.

Marilyn Irene Blewett , age 88, of Berwick and formerly of Fowlersville...

Send flowers to the Blewett family.