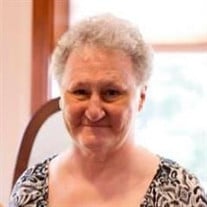 Margaret S. "Marge" Sponenberg, age 78, of Main Twp., Bloomsburg, passed away on Sunday, April 12, 2020, at her residence. Marge was a resident of her home in Main Twp. for over 60 years. She was born on Thursday, August 21, 1941 in Hazleton, a daughter of the late Peter and Marie (Ambrush) Grusastkie. On May 28, 1960, Marge married her loving husband, Wilbur C. Sponenberg, Jr. who preceded her in death on October 15, 1993. Marge was last employed at Wal Mart, Bloomsburg until her retirement in May, 2019, she was a clerk at the former Stop-N-Go and C.R. Friendly, as well as a waitress at the former Ent's Restaurant. She was the former owner of The Mainville Garage and Store and was a former school bus contractor for The Bloomsburg Area School District. Marge was a member of the St. Columba Catholic Church, Bloomsburg where she was a member of the Casey Club, she was also a member of the Women of the Moose, Bloomsburg and The Women's Christian Club, Berwick. She enjoyed spending her time watching dirt track racing and NASCAR especially Dale Earnhardt, WWE Wrestling and the Pittsburgh Steelers. She participated in the demolition derby at the Bloomsburg Fair. She was an Elvis Presley fan and loved spending time with her children, grandchildren and great grandchildren. In addition to her parents, and husband Marge was also preceded in death by a brother, Thomas Grusastkie, and a sister, Rose Marie Tomko. Survivors include her four beloved children; Anthony Sponenberg and wife Brenda of Orangeville, Fred Sponenberg and wife Terri of Mainville, Patricia M. wife of Warren Campbell of Mainville and Brenda wife of Jim Long of Bloomsburg, fifteen grandchildren; Josh Sponenberg and wife Barb of Berwick, Brandon Sponenberg and wife Beth of Berwick, Nicole wife of Ross St. Clair of Almedia, Curtis Bloom of Northumberland, Karisa wife of Austin Auten of Danville, Justin Sponenberg of Danville, Amanda wife of Richard Nevel of Orangeville, David Nevel of Orangeville, Dustin Nevel of Orangeville, Stefnie Bardo of Orangeville, Rachel wife of Nate Flick of Bloomsburg, Jeremy Campbell who resided with his grandmother in Main Twp., Shelby wife of Rob Millar of Riverside, Scott Bellum of Berwick, Trevor Long of Bloomsburg, twenty two great grandchildren; Emily, Jimmy, LeLand, Ruby, Mia, Cassidy, Damion, Cameron, Blake, Payton, Ryder, Sapphire, Lily, Phoenix, Campbell, Reagan, McKenna, Remington, Jordan, Tyler, Kallie and Jaycelyn; a great great granddaughter; Mia, one sister; Kathleen wife of Terry Urso of Mifflinville, many beloved nieces, nephews and cousins and her pet cat, Chloe. Due to the recent events and the current CDC guidelines, funeral services will be held privately for the family with graveside services held in Elan Memorial Park, Lime Ridge. Marge's family apologizes for restricting her family and friends from paying respects at this time. A celebration of life will be announced at a later date for family and friends. The Allen Funeral Home, Inc., 745 Market at Eighth streets, Bloomsburg is honored to be serving the Sponenberg family.

The family of Margaret S. "Marge" Sponenberg created this Life Tributes page to make it easy to share your memories.

Send flowers to the Sponenberg family.