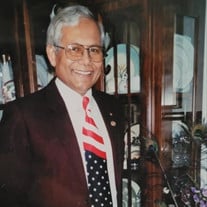 Mainuddin Afza, 76, of Bloomsburg passed peacefully on Monday, January 11, 2021. Dr. Afza was born February 27, 1944 in Malda, West Bengal, India to Ziauddin Afza and Kamrun Jahan. He earned his Bachelor’s and Master’s degrees in Commerce from Rajshahi University in Bangladesh, and PhD in Industrial Economics from Azerbaijan National Economic Institute in the USSR. After migrating to the United States in 1979, Dr. Afza earned his MBA from Youngstown University and began a career as a professor of Business Management. First at the University of Wisconsin Platteville, then moving to Bloomsburg University in 1989. He also served as Director of the Bloomsburg University International Exchange Program. During his tenure as a professor, he was awarded two Fulbright Fellowships in Baku, Azerbaijan with Western and Khazar Universities and in Dhaka, Bangladesh with BRAC and North South Universities. He also participated in an extended teaching collaboration in Tapei, Taiwan and a research collaboration with BorsodChem in Kazincbarcika, Hungary. After retiring from Bloomsburg University in 2012, he was awarded Professor Emeritus status. He was an active member of the Bloomsburg Rotary Club and various other community clubs and societies. He enjoyed routine walks through the neighborhood, avidly following the news, and reading books, journals, and magazines. He will be remembered for his jokes, smile, vibrant demeanor, passion for education, and unrelenting commitment to helping others. Dr. Afza is survived by his wife, Shahera. Daughter and spouse, Sabrina and Tareq; son and spouse, Jamil and Alycia; and son, Sohel. Grandchildren, Shafin, Samreen, and Lyra. Sister, Momotaz. Funeral services were held on January 12 at Elan Memorial Park, Bloomsburg. The Allen Funeral Home, Inc., 745 Market at Eighth Streets, Bloomsburg is honored to be serving the Afza family.

The family of Mainuddin Afza created this Life Tributes page to make it easy to share your memories.

Send flowers to the Afza family.