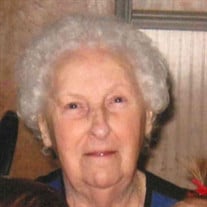 Mae Irene (Wertman) Hollingshead, age 99, passed away on Tuesday, June 15, 2021, at her residence, Riverview Point Apartments, Catawissa. She was born on December 1, 1921 to Joseph and Laurel (Gensel) Wertman of Catawissa. She was a life-long resident of the Borough of Catawissa. She graduated from the former Catawissa High School in 1939. In school she participated in the class play and prom committee, and was also the captain of the championship Columbia County League basketball team. In 1948 she was married to Benjamin Hollingshead who was the Catawissa Borough Chief of Police. Prior to her marriage she lived on South Third street and then she and Ben lived at 214 North Street in Catawissa where they raised their family. She has lived the last 26 years at the high rise on Main St. in Catawissa which is now known as Riverview Point. Mae was employed at the Regal and Emenee shirt factories, and was elected Catawissa borough tax collector for 20 plus years. She was fond of playing cards, especially pinochle, and was known for her wry sense of humor and her feistiness. She loved going to the mall with her girlfriends when the Bon Ton coupons came out and had a little bit of a lead foot when driving. She also loved to read and do puzzles on her kindle and up until she lost her vision checked her Face Book page regularly to see pictures of her grandchildren and great grandchildren. She loved a hamburger with a big slice of onion, sauerkraut and watching Outlander. Her grandchildren fondly remember her as a strong woman who made killer mac and cheese and baked beans, could ride a sled like a champ, kept an immaculate home, could outrun a sandstorm on the beach with the best of them. She had a profound love of chocolate, but most of all loved her family. She had two sons, David Jeffrey Hollingshead and Mark Joseph Hollingshead. She was preceded in death by her son Mark, a brother Charles Wertman and three sisters, Deborah Shultz, Betty Rasmussen and Margaret Wertman who died in infancy. She is survived by her son and daughter-in-law, David and Mary Hollingshead of Coal Township, PA. Her daughter-in-law, Jane Hollingshead of Catawissa, five grandchildren, Mark Hollingshead of Catawissa, Alicia Hollingshead of Catawissa, Heather wife of William Brady of Danville, Brian Hollingshead and wife Caitlyn of Plains and Brett Hollingshead and wife Holly of Windham, NH. She was GiGi to her surviving ten great grandchildren: Ayzah Quinn, Marin Hollingshead, Wyatt Brady, Abigail Brady, Blake Hollingshead, Braedon Hollingshead, Sarah Hollingshead, Bryce Hollingshead, Brooks Hollingshead and Camryn Hollingshead. She is also survived by several nieces and nephews. We also wish to thank all of her dedicated caregivers from Family Home Care, especially Shawna, Theresa, Nancy, Karen and Renate who were like family. According to her wishes there will be no viewing and only a private graveside memorial service. Interment will be in Elan Memorial Park, Lime Ridge. The Allen Funeral Home, Inc., 745 Market at Eighth Streets, Bloomsburg is honored to be serving the Hollingshead family. Memorial contributions in Mae's name are suggested to: Geisinger Hospice, 74 Schoolhouse Road, Suite 104, Danville, PA 17821.

Mae Irene (Wertman) Hollingshead, age 99, passed away on Tuesday, June 15, 2021, at her residence, Riverview Point Apartments, Catawissa. She was born on December 1, 1921 to Joseph and Laurel (Gensel) Wertman of Catawissa. She... View Obituary & Service Information

The family of Mae Irene Hollingshead created this Life Tributes page to make it easy to share your memories.

Send flowers to the Hollingshead family.