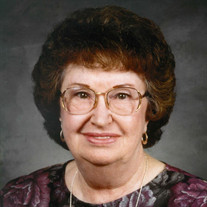 Louise Ann Ohl, age 87, of Bloomsburg, passed away on Wednesday, June 24, 2020, a patient of the Berwick Hospital Center. Louise was a resident of her home in Bloomsburg for over 60 years. She was born on Sunday, May 7, 1933 in Danville, a daughter of the late Daniel Kocher and Margaret (Barrett) Morgan. Louise graduated from the Danville High School in 1951. On August 22, 1953, Louise married her loving husband, Clyde L. "Bud" Ohl Jr. who preceded her in death on February 6, 2007. Louise was employed as a Telecommunications Operator first with Bell Telephone Company and later at Geisinger Medical Center, Danville until her retirement in 1996. She was a 50 year member of the Good Shepherd United Methodist, Bloomsburg, where she organized the Lunch Bunch. She taught Sunday School at the former E.U.B. Church, Danville and was a Girl Scout Leader. Louise enjoyed spending her time doing word searches and being with her dogs Jack and Sadie. She loved spending time with her family and was looking forward to the birth of her great great grandson M.J. Parker in July. In addition to her parents, and husband, Louise was also preceded in death by a daughter, Barbara A. Ohl on October 25, 2017, a son-in-law, David W. Ebright on July 7, 2003, two grandsons, Joseph Parri, and Todd Remley, a great great grandson, Gage Evans, and a sister, Dorothy Kurtz.   Survivors include her beloved children, a daughter, Lori Ann Ebright of Bloomsburg, a son, Richard Ohl of Bloomsburg, five grandchildren, Ashley Ebright of Bloomsburg, Danielle Parri of Danville, Gary Ohl and wife Shirley of Bloomsburg, Donna Ohl of Pottsville, Laura Seeley of Bloomsburg, eight great grandchildren, Hannah Remley and fiance Michael Parker of Bloomsburg, Olivia Remley of Bloomsburg, Adam Parri and wife Catherine of Benton, Kayla Parri of Benton, Cara wife of Robert Chase of Brookville, Shannon Ohl of Bloomsburg, Amy Bechtel of Pottsville, Lauren Bechtel of Pottsville, three great great granddaughters, Stella Parri of Benton, Faith Chase of Brookville, Courtney Chase of Brookville, two nieces, Louise wife of John Fetterman of Elysburg, Beverly Harmon of Bloomsburg, a nephew, Tom Kurtz and wife Robin of Lebanon, and a sister, Mary Elizabeth Morgan of LaPorte. A time of visitation for family and friends will be held on Monday, June 29, 2020 from 10:00 am to 11:00 am at Good Shepherd United Methodist Church, 101 East Fifth St., Bloomsburg. Funeral services will begin on Monday, June 29, 2020 at 11:00 am at Good Shepherd United Methodist Church with Rev. Gary Reichenbach, officiating. The Allen Funeral Home, Inc., 745 Market at Eighth Streets, Bloomsburg is honored to be serving the Ohl family. Memorial contributions in Louise's name are suggested to: Good Shepherd United Methodist Church, 101 East Fifth St., Bloomsburg, PA 17815.

Louise Ann Ohl, age 87, of Bloomsburg, passed away on Wednesday, June 24, 2020, a patient of the Berwick Hospital Center. Louise was a resident of her home in Bloomsburg for over 60 years. She was born on Sunday, May 7, 1933 in Danville,... View Obituary & Service Information

The family of Louise Ann Ohl created this Life Tributes page to make it easy to share your memories.

Louise Ann Ohl, age 87, of Bloomsburg, passed away on Wednesday,...

Send flowers to the Ohl family.