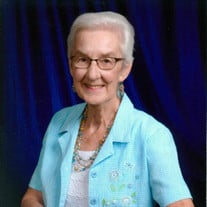 Lois F. Stauder, age 80, of Bloomsburg, passed away on Sunday, August 9, 2020, a patient of the Geisinger Medical Center, Danville. Lois was a resident of Bloomsburg for most of her life. She was born on Tuesday, January 30, 1940 in Larksville, a daughter of the late Joseph and Louise (Schacht) Price. Throughout her younger years, Lois attended the Bloomsburg area schools, and later graduated from the Bloomsburg High School in 1957. For many years, Lois was employed by Magee Carpet Company and later for Bloom Carpet until her retirement in 2007. Lois was a member of the First English Baptist Church for over 50 years where she served on the prayer team and attended women's bible study. Lois was an avid reader, she enjoyed crossword and jigsaw puzzles and collecting honey pots. During her younger years, she enjoyed sewing, crocheting and antique shopping. In addition to her parents, Lois was also preceded in death by her first husband, Donald Fetterman, her second husband, Joseph Stauder, two brothers, Donald Price, Harold Price, and a sister, Shirley Clemens. Survivors include her two beloved daughters; Cheri wife of Matt Pelton of Danville, Wendy wife of Joe Corsano of Berwick, six stepchildren, James Stauder and wife Mindy, Linda wife of Lenny Tomashefski, Lori wife of Ken Piestrak, Robert Stauder and wife Kathy, Joseph Stauder and wife Sue, William Stauder and wife Kim, a sister, Nancy wife of Robert Williams of Doylestown, a brother, Burt Price and wife Malinda of Lewisburg, several step grandchildren and great grandchildren, along with many nieces and nephews. Due to the recent events and the current CDC guidelines, funeral services will be held privately for the family at the Allen Funeral Home, Inc., 745 Market at Eighth Streets, Bloomsburg, with Rev. Dr. Lee Barnhardt, officiating. The Allen Funeral Home, Inc., is honored to be serving the Stauder family. Memorial contributions in Lois's name are suggested to: First English Baptist Church, 700 Millville Road, Bloomsburg, PA 17815.

Lois F. Stauder, age 80, of Bloomsburg, passed away on Sunday, August 9, 2020, a patient of the Geisinger Medical Center, Danville. Lois was a resident of Bloomsburg for most of her life. She was born on Tuesday, January 30, 1940 in Larksville,... View Obituary & Service Information

The family of Lois F. Stauder created this Life Tributes page to make it easy to share your memories.

Send flowers to the Stauder family.