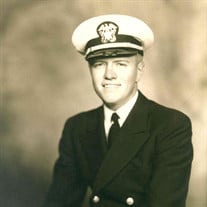 LeRoy Heller Wintersteen, DDS, age 99, of Orangeville, passed away on Wednesday, November 11, 2020, a resident of The Gardens at Orangeville. He was born on Wednesday, November 9, 1921 in Danville, a son of the late Andrew LeRoy and Bertha (Heller) Wintersteen. LeRoy graduated from the Danville High School in 1939. He expanded his education by attending Franklin & Marshall, Lancaster and Temple University, Philadelphia, graduating with a Doctorate degree in dentistry. He served on active military duty during WW II and the Korean Conflict with the Army, Navy and Marine Corps units, retiring with the rank of Captain with the U.S. Navy. On June 11, 1988, LeRoy married his loving wife, Linda S. Wintersteen. Dr. Wintersteen was in private dental practice in Danville from 1945 until his retirement in 1985. He was a member of the Ebenezer United Methodist Church, the American Dental Association, Pennsylvania Dental Society, and the Tri-County Dental Society. He was also a member of the Mahoning Masonic Lodge, Danville and the Caldwell Consistory, Bloomsburg. In addition to his parents, LeRoy was also preceded in death by his first wife Melva Kocher Wintersteen, a brother, Jack Wintersteen, and three sisters, Lois Wintersteen, Frances Stainsby, and Janet Shade. Survivors include his beloved wife of 32 years, Linda S. Wintersteen, three step-children, Roger Austin and wife Sandy of Elliottsburg, PA, Leanne Austin of Bloomsburg, Jerri Lynn wife of Scott Crawford of Bloomsburg, five grandchildren, Natalie wife of Joseph Yanochko, Christopher Crawford, Emily Crawford, Jacob Austin, and Max Austin, as well as many nieces and nephews. Private graveside services will be held at the convenience of the family at Elan Memorial Park, Lime Ridge with Pastor Deb Harvey, officiating. Military honors will be presented by a combined VFW and American Legion groups. The Allen Funeral Home, Inc., 745 Market at Eighth Streets, Bloomsburg is honored to be serving the Wintersteen family.

The family of LeRoy Heller Wintersteen, DDS created this Life Tributes page to make it easy to share your memories.

Send flowers to the Wintersteen, family.