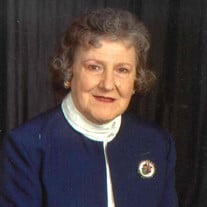 Lena B. Thomas, age 94, of Sherwood Village, Bloomsburg, died on Friday, January 3, 2020, a patient of the Geisinger Medical Center in Danville. Lena was born on Wednesday, September 2, 1925 in Rohrsburg, a daughter of the late D. E. "Jack" and Mary (Davis) Thomas. Lena graduated from Orangeville High School in 1943 and Thompson Institute, Harrisburg. She received a B.S. degree in Medical Technology from Penn State University, and a M.S. degree in Medical Technology from Wayne State University in conjunction with Henry Ford Hospital in Detroit, Michigan. She earned a Ph.D. degree from American University in Washington, D.C. She was employed as Chief Technologist at Evangelical Community Hospital, and as Chief Technologist and Teaching Supervisor at Lourdes Hospital, Binghamton, NY. For several years, she was Associate Professor and Educational Director of the School of Medical Technology, Medical College of Virginia in Richmond, VA. Lena faithfully attended the Shiloh Bible Church, Almedia. She was a member of Iota Sigma Pi and Gamma Sigma Delta honorary societies. She was also a member of the American Society of Medical Technology, American Association of University Professors and American Association of University Women. She enjoyed traveling and traveled throughout the world.   Lena did volunteer work in hospitals and nursing homes, and also for the American Red Cross, Girl Scouts and charitable organizations. She was a chaplain at the Bloomsburg Hospital for many years. She spent twenty years in Atlanta, Georgia evangelizing and ministering to inner city families. While there, she founded and directed the organization Kids For Christ, Inc. She was preceded in death by eight brothers and sisters: Earl, Gerald and Doyle Thomas, Gertrude Rhone, Helen Young, Vera Artman, Eleanor Belles and Ruth Belles. Survivors include a brother, Harold Thomas of Allentown and numerous nieces and nephews. A time of Visitation for family and friends will be held on Wednesday morning, January 8, 2020 from 10 a.m. to 11 a.m. at the Allen Funeral Home, Inc., 745 Market at Eighth Street in Bloomsburg. Funeral Services will begin on Wednesday morning, January 8 at 11:00 a.m. at the Allen Funeral Home, Inc. with her pastor, Rev. Dr. Douglas H. Lyon, officiating. Graveside committal services will immediately follow in the Canby Lutheran Cemetery, Mt. Pleasant Township. The Allen Funeral Home, Inc., is honored to be serving the Thomas family. Memorial contributions in Lena's name are suggested to: Shiloh Bible Church 123 Church St., Bloomsburg, PA 17815.

Lena B. Thomas, age 94, of Sherwood Village, Bloomsburg, died on Friday, January 3, 2020, a patient of the Geisinger Medical Center in Danville. Lena was born on Wednesday, September 2, 1925 in Rohrsburg, a daughter of the late D.... View Obituary & Service Information

The family of Lena B. Thomas created this Life Tributes page to make it easy to share your memories.