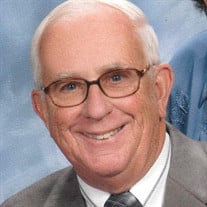 Lawrence J. "Larry" Splitt , age 74, of Bloomsburg, died on Monday, September 11, 2017, at his home in South Centre Township. Larry was born on Monday, April 19, 1943 in Shamokin, a son of the late John and Anna (Sapilak) Splitt. Larry graduated from the former Mt. Carmel Catholic High School in 1961. He expanded his education by attending Bloomsburg State Teachers College, and graduated with a Bachelor's of Arts Degree in 1966. On May 23, 1968, Larry married his loving wife the former, Joanna Kreischer. They celebrated 49 years of marriage. For over 25 years, Larry was employed by Equifax as an insurance investigator and after retirement from there he was a salesman for Zeisloft Ford for eight years until he finally retired. Larry was a member of the St. Columba Catholic Parish, Bloomsburg. He was also a member of the Bloomsburg American Legion Post #273 and the Espy Fire Co. Survivors in addition to his beloved wife, Joanna Splitt of Bloomsburg are two daughters: Denise Venditti and husband, Angelo, of Bloomsburg, and Marcia Yatcilla and husband, Peter, of Old Forge, four grandchildren: Sarah Beechay, Kaitlyn Beechay, Leanna Yatcilla,and Johnnie Venditti and a brother: Kenneth Splitt and spouse, Pat, of Kulpmont. A time of Visitation for family and friends will be held on Wednesday, September 13, 2017 from 6:00 pm to 8:00 pm at the Allen Funeral Home, Inc. 745 Market at Eighth St.Bloomsburg. A Christian Wake Service will be held at 7 pm. A Mass of Christian Burial will begin on Thursday, September 14, 2017 at 11:00 am at St. Columba Catholic Church, Third and Iron Streets with Rev. Patrick A. Devine, as celebrant. Graveside committal services will immediately follow in the New Rosemont Cemetery, Espy. The Allen Funeral Home, Inc., is honored to be serving the Splitt family. Memorial contributions in Lawrence's name are suggested to: Animal Resource Center c/o Linda Bird, 301A Boone Road, Bloomsburg, PA 17815 or St. Columba Catholic Church, 342 Iron St., Bloomsburg, PA 17815.. Friends and family wishing to send a memorial gift, share a personal memory or offer condolences to the family, a Memorial Tribute Page in Lawrence’s honor and a Sympathy Store are available at www.Allen FuneralHome.com.

The family of Lawrence J. "Larry" Splitt created this Life Tributes page to make it easy to share your memories.

Send flowers to the Splitt family.