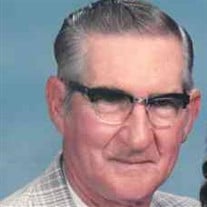 Larue D. Whiteco , age 95, of Bloomsburg, passed into the arms of his Heavenly Father on Saturday, June 1, 2019, a patient of the Geisinger Hospice at Maria Hall in Danville. Larue was a resident of his home that he made with Julia in Almedia for 67 years. Larue was born on Friday, November 30, 1923 in Beaver Township, a son of the late John and Minnie (Rupert) Whiteco. Throughout his younger years, he attended the Beaver Consolidated Schools. He faithfully served his country during World War II in the US Army in Northern France, Rhineland and Central Europe as a teletype operator with Company "A", 310th Signal Operation Battalion. He was honorably discharged November 4, 1945 with the rank of Technician Fourth Grade. Larue married his loving wife, Julia Petock Whiteco formerly of Main Township on June 6, 1944. Julia passed June 8, 2017, two days after celebrating 73 years of marriage. For over 45 years, Larue was employed by Bloomsburg Mills as a Supervisor of the Weaving Department until his retirement in 1985. Larue attended Almedia Bible Church. He enjoyed spending his time hunting on his Beaver Township property and fishing on the Susquehanna River and at Rose Valley Lake. In addition to his parents, Larue was also preceded by sister, Evelyn Petock. Survivors include his children: Barbara Bechtold and husband, Barry, and Terry Whiteco and wife, Judy, both of Beaver Township; grandchildren: Lindsay Smith and finance, Domingo Rosario, Derek Smith and wife, Jackie, great-grandchildren: Raelynn Marie Rosario and Dylan Larue Smith: step-grandson: Thomas Arnold and wife, Meredith, and step-great grandchildren: Garrett Arnold and Alex Arnold. A time of Visitation for family and friends will be held on Wednesday, June 5, 2019 from 5:00 pm to 7:00 pm at the Allen Funeral Home, Inc., 745 Market at Eighth St., Bloomsburg. Funeral Services will begin on Thursday, June 6, 2019. Larue's and Julia's Wedding Anniversary date, at 10:00 am at the Almedia Bible Church, 278 VanDine St., with Rev. Larry Smith, officiating. Graveside committal services will immediately follow in the Elan Memorial Park. The Allen Funeral Home, Inc., is honored to be serving the Whiteco family. Memorial contributions in Larue's name are suggested to: Almedia Bible Church 278 Van Dine St. Bloomsburg, PA 17815. Friends and family wishing to send a memorial gift, share a personal memory or offer condolences to the family, a Memorial Tribute Page in Larue's honor and a Sympathy Store are available at www.Allen-FuneralHome.com.

Larue D. Whiteco , age 95, of Bloomsburg, passed into the arms of his Heavenly Father on Saturday, June 1, 2019, a patient of the Geisinger Hospice at Maria Hall in Danville. Larue was a resident of his home that he made with Julia in Almedia... View Obituary & Service Information

The family of Larue D. Whiteco created this Life Tributes page to make it easy to share your memories.

Send flowers to the Whiteco family.