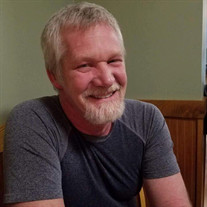 Kirby Scott Collett, age 56, of Mifflinville, went home to be with his Lord and Savior on Thursday, February 22, 2018, at his Mifflinville home surrounded by his loving family. Kirby was a resident of his home in Mifflinville for over 12 years. He was born on Saturday, July 15, 1961 in Shelbyville, Kentucky, a son of Kirby and Maxie (Welch) Collett of Kentucky. For over 32 years, Kirby was employed by Roberts Automotive, Bloomsburg as a Mechanic. Kirby was a Social Member of Bloomsburg VFW Post #804 and APA "American Poolplayers Association". Kirby enjoyed spending his time playing pool, riding his Harley Davidson motorcycle, trips to Gettysburg and spending time with his grandchildren who affectionately knew him as Papaw. Kirby was preceeded in death by his loving first wife Gloria J. (Snyder) Collett on November 20, 2003 and a Sister In Law Karen L. Weiss on September 15, 1992. In addition to his parents, survivors include his second wife, Lisa A. (Brobst) Collett of Orangeville; daughter, Jessie L. Young and significant other Jered Learn of Berwick; son, Scott B. Collett of Bloomsburg; stepchildren Amber J. wife of Craig Kurzawa of Danville; Andrew D. Rupp of Orangeville; 13 grandchildren; four sisters, Debbie wife of Leon Smith; Phyllis Harkins; Kitty Taylor all of KY; Deanna Collett of TN, two brothers, Stuart Collett and Curtis Collett both of of TN; niece, Dana L. Damron of Millville; nephew, Thomas E. Damron and wife Jade of TN; and his furry companion Shelby. A time of Visitation for family and friends will be held on Friday, March 2, 2018 from 5:00 pm to 7:00 pm at the Allen Funeral Home, Inc., 745 Market at Eighth Streets, Bloomsburg. Funeral Services will begin on Friday, March 2, 2018 at 7:00 pm at the Allen Funeral Home, Inc. with Pastor Neil S. Martin, Calvary Bible Chapel, Hunlock Creek, officiating. The Allen Funeral Home, Inc., is honored to be serving the Collett family. Memorial contributions in Kirby's name are suggested to: Bloomsburg VFW Post #804, 1258 Millville Road, Bloomsburg, PA 17815. Friends and family wishing to send a memorial gift, share a personal memory or offer condolences to the family, a Memorial Tribute Page in Kirby’s honor and a Sympathy Store are available at www.Allen FuneralHome.com.

Kirby Scott Collett, age 56, of Mifflinville, went home to be with his Lord and Savior on Thursday, February 22, 2018, at his Mifflinville home surrounded by his loving family. Kirby was a resident of his home in Mifflinville for over 12 years. He... View Obituary & Service Information

The family of Kirby Scott Collett created this Life Tributes page to make it easy to share your memories.

Kirby Scott Collett, age 56, of Mifflinville, went home to be...

Send flowers to the Collett family.