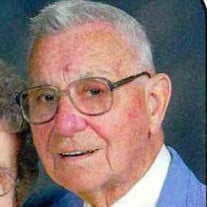 Kimber L. Pegg, Jr. , age 89, of Bloomsburg, died on Monday, September 26, 2016, surrounded by his family in the Grandview Health Homes in Danville. Kimber was a life long resident of Bloomsburg. Kimber was born on Monday, May 23, 1927 in Bloomsburg, a son of the late Kimber L. Pegg, Sr. and Pearl (Brooking) Tedesco. Throughout his younger years, Kimber attended the Bloomsburg area schools, and was adopted into the Class of 1947. Upon leaving high school Kimber faithfully served his country during World War II. He was honorably discharged from the US Navy. On September 13, 1947, Kimber married his loving wife, Betty (Troy) Pegg of Bloomsburg. They recently celebrated 69 years of marriage. For over 39 years, Kimber was employed by Milco Industries of Bloomsburg as a Dye Master until his retirement. Kimber was a member of the Trinity Reformed United Church of Christ. He was also a life member of the Bloomsburg Elks Lodge #436 B.P.O.E., a life member the former Rescue Fire Co. Kimber enjoyed spending time with his family. He was active with Little League Baseball and Midget Football, he was an avid Philadelphia Phillies fan and he enjoyed the NFL. Survivors include his beloved wife of 69 years, Betty (Troy) Pegg of Bloomsburg; a son, Donald A. Pegg and wife, Connie, of Bloomsburg, granddaughter, Julie Kreamer and husband, Christopher, of Lansdale, PA; grandson: Christian Pegg and wife, Kelly Ann, of Bloomsburg: great grandchildren: Lindsey Kreamer, Cale Kreamer, Nathan Pegg, and Justin Pegg; sisters: Ruth Eyerly of Benton, and Cheryl Robbins of Bloomsburg, PA and a brother: Roy Pegg of Pasadena, MD. A time of Visitation for family and friends will be held on Friday, September 30, 2016 from 10:00 am to 11:00 am at the Trinity Reformed United Church of Christ, 260 East Seventh St.Bloomsburg. Funeral Services will continue on Friday at 11:00 am in the Trinity Reformed United Church of Christ with his pastor, Rev. Steven Hummel, officiating. The Allen Funeral Home, Inc., is honored to be serving the Pegg family. Memorial contributions in Kimber's name are suggested to: Trinity Reformed United Church of Christ 260 E. Seventh St., Bloomsburg PA 17815.

Kimber L. Pegg, Jr. , age 89, of Bloomsburg, died on Monday, September 26, 2016, surrounded by his family in the Grandview Health Homes in Danville. Kimber was a life long resident of Bloomsburg. Kimber was born on Monday, May 23, 1927 in... View Obituary & Service Information

The family of Kimber L. Pegg, Jr. created this Life Tributes page to make it easy to share your memories.

Send flowers to the Pegg, family.