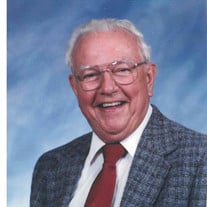 Keith A. Schell, age 95, of Bloomsburg, passed away unexpectedly on Friday morning, June 8, 2018, at his Lightstreet residence. Keith was a resident of his home in Lightstreet for over 70 years. He was born on Monday, March 19, 1923 in Shumans, (Beaver Twp.) a son of the late Arthur and Dora (Steely) Schell. Throughout his younger years, Keith attended the Beaver Twp. area schools, and later graduated from the former Beaver Twp. High School in 1941 as class valedictorian. He faithfully served his country in the U.S. Army during WW II and was honorably discharged in 1945. Keith expanded his education by attending Hazleton Vocational Technical School, and graduated with an Engineering Degree in 1946. In 1947, Keith married his loving wife, the former Doris M. Oberdorf who preceded him in death on November 27, 2005. For over 33 years, Keith was employed by TRW as an Engineer until his retirement in 1985. Keith was a member of the Lightstreet United Methodist Church, where he served as a past financial secretary. He was also a member of the Washington Lodge #265 F&AM, Caldwell Consistory, Irem Temple, Wilkes Barre and The Lightstreet Fire Company. Keith enjoyed spending his time gardening, fishing, being outdoors and he could fix anything. In addition to his parents and wife Keith was also preceded by a granddaughter, Megan Schell Zimmerman and two brothers, Curtis Schell and Lerald "Bub" Schell.   Survivors include his three children, daughter, Peggy Jo Schell and husband Steven R. Zimmerman of Bloomsburg; two sons, David L. Schell and wife Alicia of St. Petersburg, FL; Douglas A. Schell and his partner Kay Piscitello of Danielsville, PA; granddaughter, Amy Jo Schell Zimmerman, grandson, Luke Aaron Schell Zimmerman and a sister in law, Doris Schell of Mainville. A time of Visitation for family and friends will be held on Tuesday, June 12, 2018 from 11:30 am to 1:00 pm at the Allen Funeral Home, Inc., 745 Market at Eighth Streets, Bloomsburg, with Masonic Services held by Washington Lodge #265 F&AM at 11:30 am. Funeral Services will begin on Tuesday, June 12, 2018 at 1:00 pm at the Allen Funeral Home, Inc. with Rev. Jennifer Parks Snyder, officiating. Graveside committal services will immediately follow in Elan Memorial Park, Lime Ridge with military services by the combined American Legion and V.F.W. groups. The Allen Funeral Home, Inc., is honored to be serving the Schell family. Memorial contributions in Keith's name are suggested to: Lightstreet United Methodist Church, 1640 Main Street, Bloomsburg, PA 17815. Friends and family wishing to send a memorial gift, share a personal memory or offer condolences to the family, a Memorial Tribute Page in Keith’s honor and a Sympathy Store are available at www.Allen FuneralHome.com.

Keith A. Schell, age 95, of Bloomsburg, passed away unexpectedly on Friday morning, June 8, 2018, at his Lightstreet residence. Keith was a resident of his home in Lightstreet for over 70 years. He was born on Monday, March 19, 1923 in Shumans,... View Obituary & Service Information

The family of Keith A. Schell created this Life Tributes page to make it easy to share your memories.

Keith A. Schell, age 95, of Bloomsburg, passed away unexpectedly...

Send flowers to the Schell family.