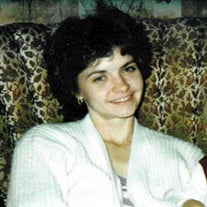 Karen L. Tapp, age 61, of Danville, passed away on Tuesday evening, August 25, 2020, surrounded by her loving family at Grandview Nursing and Rehabilitation Center, Danville. Karen was a resident of her home in Danville for over 26 years. She was born on Wednesday, December 17, 1958 in Tacoma, WA a daughter of June L. (McCoy) Kratzer of Danville and the late Carl L. Moser. Karen graduated from the Columbia Montour Vocational Technical School in 1976. On February 16, 1985, Karen married her loving husband, Roger J. Tapp Jr. She was employed as a bartender at Pat's Grille in Danville, and previously worked at The Yankee Pedlar Inn in Massachusetts. Karen was a member of the Trinity Lutheran Church, Danville. Karen enjoyed spending her time listening to Blues Music and attended music festivals for over 20 years in the Poconos and throughout the area. Music was a very big interest outside of spending time with her grandchildren. Survivors include her beloved husband of 35 years, Roger J. Tapp, Jr. of Danville, her mother, June L. Kratzer of Danville, a daughter, Angela and husband Marc of Danville, a son, Roger J. Tapp, III of Danville, six grandchildren, Brett, Braylen, Brady, Bronson, Blaykslee, and Bentlee, two brothers, Jan Moser and wife Tina of Alberta, VA, Mark Moser and wife Amy of Riverside, a sister, Lynn wife of Carl Parker of Bloomsburg, and an aunt, Kathleen McCoy of Danville.   A Celebration of Life service will be announced at a future date. The Allen Funeral Home, Inc., 745 Market at Eighth Streets, Bloomsburg is honored to be serving the Tapp family. Memorial contributions in Karen's name are suggested to: The National Multiple Sclerosis Society, 2000 Linglestown Road, Suite 201, Harrisburg, PA 17110.

Karen L. Tapp, age 61, of Danville, passed away on Tuesday evening, August 25, 2020, surrounded by her loving family at Grandview Nursing and Rehabilitation Center, Danville. Karen was a resident of her home in Danville for over 26... View Obituary & Service Information

The family of Karen L. Tapp created this Life Tributes page to make it easy to share your memories.

Send flowers to the Tapp family.