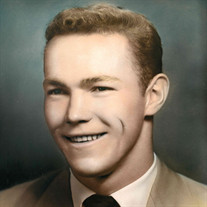 Joseph E. Weiss Jr., age 85, of Bloomsburg, passed away on Friday, November 8, 2019, a patient of the Bloomsburg Care and Rehabilitation Center. Joe was a resident of Bloomsburg for most of his life, except for his years of his military service spent in Germany. Joe was born on Sunday, August 12, 1934 in Bloomsburg, a son of the late Joseph, Sr. and Lena Madge (Robbins) Weiss. Throughout his school days, Joe excelled in football and proudly served as co-captain of his high school team. Joe graduated from the Bloomsburg High School in 1953 and went on to further his education at Penn State Hazleton where he earned certification in electrical engineering. Joe faithfully served his country in the United States Army until his honorable discharge in 1962. While stationed in Germany during his military years, Joe met the love of his life, Hannahlore Hamel. On December 19, 1955, the two were married and spent the next 46 years together until Lore's death in October, 2001. During the 1960's, Joe was an employee of The Magee Carpet Company, where he fiercely fought for the unionization of the factory workers. Joe played an integral role in the eventual formation of the factory's union, a hard fought victory the lifelong Democrat spoke proudly of throughout the years. Joe was later employed by White Haven State School, where for 25 years he enjoyed his work as a painter, until his retirement in 1994. Joe was a beloved coach of the Bloomsburg Bears midget football team and a longtime member of the Community of Christ Church, Bloomsburg. He was a gifted artist and would share his talent by drawing portraits for church functions. Joe loved bird watching and working in his garden. He enjoyed studying geography and was well versed in world history. Joe also loved his Philadelphia Phillies, an obsession he shared with his brother John and passed down to his daughter and granddaughter. Everyone who met Joe was instantly charmed by the fun, good natured jokester that he was. But no one adored him more than his family. He was an incredibly loving son, brother, husband, father and grandfather. In addition to his parents, and wife, Joe was preceded in death by his infant son, Joseph; a sister, Arlene Mourey, and two brothers, Richard H. Weiss, and Robert E. Weiss. Survivors include his beloved daughter, Lore Nuss of Bloomsburg, a son, Carl Weiss of Montandon, three grandchildren, Nicole R. Nuss of Berkeley, CA, Kimberly Weiss, and Jeffrey Weiss, a brother, John N. Weiss of Bloomsburg, and a sister, Sandy L. wife of Thomas Brobst of Bloomsburg. Joe is also survived by his loving girlfriend, Joyce McBride of Bloomsburg, who was a very important part of his family for more than 15 years. A time of visitation for family and friends will be held on Friday, November 15, 2019 from 10:00 am to 11:00 am at the Allen Funeral Home, Inc., 745 Market at Eighth Streets, Bloomsburg. Funeral Services will begin on Friday, November 15, 2019 at 11:00 am at the Allen Funeral Home, Inc. with Elder Janice Rishe, officiating. Graveside committal services will immediately follow in the Dutch Hill Cemetery, Madison Twp., with military honors being provided by a combined American Legion and VFW groups. The Allen Funeral Home, Inc., is honored to be serving the Weiss family. Memorial contributions in Joe's name are suggested to: Community Of Christ Church, 750 Market St., Bloomsburg, PA 17815. Friends and family wishing to send a memorial gift, share a personal memory or offer condolences to the family, a Memorial Tribute Page in Joe’s honor and a Sympathy Store are available at www.Allen-FuneralHome.com.

Joseph E. Weiss Jr., age 85, of Bloomsburg, passed away on Friday, November 8, 2019, a patient of the Bloomsburg Care and Rehabilitation Center. Joe was a resident of Bloomsburg for most of his life, except for his years of his military... View Obituary & Service Information

The family of Joseph E. Weiss Jr. created this Life Tributes page to make it easy to share your memories.

Send flowers to the Weiss family.