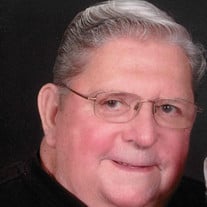 John I. "Jack" Severn, age 90, of Bloomsburg, passed away Sunday, September 15, 2019, at his residence surrounded by his loving family. He was a resident of his home in Bloomsburg for over 60 years. Jack was born on Tuesday, January 8, 1929 in Bloomsburg, a son of the late Isaac and Gertrude (Mayan) Severn. Throughout his younger years, Jack attended the Bloomsburg area schools, and later graduated from the Bloomsburg High School. He faithfully served his country in the U.S. Air Force during the Korean War and was honorably discharged in 1952. On February 1, 1950, Jack married his loving wife, the former Helen P. Polk who preceded him in death on March 16, 2017. Jack was employed by the former Magee Carpet Co., Bloomsburg for many years and later at National Gypsum, New Columbia both as a Welder and Pipe Fitter until his retirement in 1994. During his retirement he worked for his daughter at Steph's Sub Shop on Main Street, Bloomsburg for many years. He was a member of St. Columba Catholic Church, Bloomsburg and also a member of the Bloomsburg American Legion Post #273, the former Wynona Fire Co., and the Bloomsburg Moose Lodge. Jack was a very good golfer and bowler, he loved to root for Penn State football and the Philadelphia Phillies. He enjoyed spending time at his summer home in Forks and vacationing with family in Rehoboth Beach, DE. In addition to his parents and wife, Jack was also preceded in death by a sister, Mary Brennan. Survivors include his beloved daughter, Stephanie A. Severn of Bloomsburg, a niece, Kathy A. Stewart of Bloomsburg, and his dear friends Jan, John and Kim Barton and family. He is also survived by his two beloved pet dogs Julie Ann and Sophie Mae. A time of Visitation for family and friends will be held on Wednesday, September 18, 2019 from 10:00 am to 11:00 am at St. Columba Catholic Church, 342 Iron St., Bloomsburg. Mass of Christian Burial will begin on Wednesday, September 18, 2019 at 11:00 am at St. Columba Catholic Church with Monsignor Robert E. Lawrence, officiating. Graveside committal services will immediately follow in New Rosemont Cemetery, Espy with military honors being provided by a combined American Legion and V.F.W. groups. The Allen Funeral Home, Inc., 745 Market at Eighth Streets, Bloomsburg is honored to be serving the Severn family. Memorial contributions in John's name are suggested to: Bloomsburg Ambulance Association, 307 E. Main St. Bloomsburg, PA 17815 or Bloomsburg Fire Co., 911 Market St., Bloomsburg, PA 17815. Friends and family wishing to send a memorial gift, share a personal memory or offer condolences to the family, a Memorial Tribute Page in Jack’s honor and a Sympathy Store are available at www.Allen FuneralHome.com.

John I. "Jack" Severn, age 90, of Bloomsburg, passed away Sunday, September 15, 2019, at his residence surrounded by his loving family. He was a resident of his home in Bloomsburg for over 60 years. Jack was born on Tuesday, January... View Obituary & Service Information

The family of John I. "Jack" Severn created this Life Tributes page to make it easy to share your memories.

Send flowers to the Severn family.