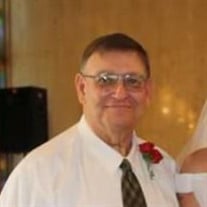 John J. O'Brien Sr., age 71, of Lightstreet, passed away on Monday, December 28, 2020, a patient of the Geisinger Medical Center in Danville. John was a resident of Lightstreet for most of his life. He was born on Monday, June 20, 1949 in Manchaug, MA a son of the late John A. and Katherine M. (Kacur) O'Brien. John graduated from Central Columbia High School in 1967. He expanded his education by attending Luzerne County Community College where he graduated in 2008. For over 25 years, John was employed by Bethesda Treatment Center, Bloomsburg as a Drug and Alcohol Counselor until his retirement in 2015. John was a former Deputy Sheriff for Columbia County. He was a member of the Berwick Bible Church, he was also a member of the National Rifle Association, the Republican Party, and the Maria Assunta Club, Berwick. He enjoyed spending his time hunting, collecting coins, stamps, curios, and such. John was a devoted father, friend and worker for all he came in contact with. He loved rummaging through flea markets buying and selling collectibles, and helping friends. He resided with his younger brother, David in Lightstreet since 1986. Both helped raise his children and foster children throughout the years. His presence will be greatly missed. Go in peace dear brother. In addition to his parents, John was also preceded in death by a son, John Jacob O'Brien, Jr. on September 19, 2010, and a son-in-law Joseph Cassano. Survivors include a daughter, Kristy O'Brien-Cassano of West Palm Beach, FL, a step daughter, Ronnie Margaret O'Brien of Nescopeck, a grandson, Caleb O'Brien of Berwick, five siblings; David P. O'Brien of Bloomsburg, Robert O'Brien and wife Glenda of Dunmore, Thomas O'Brien of Orangeville, Karen wife of Frank Brenchley of Bloomsburg, Margaret McHenry of Bloomsburg, and his beloved girlfriend, Billyette of Berwick. Graveside services will be held on Saturday, June 19, 2021 at 10:00 am in St. Mary's Catholic Cemetery, Mocanaqua. A gathering of family and friends will follow at the Bloomsburg Elks, 1223 Old Berwick Road, Bloomsburg. The Allen Funeral Home, Inc., 745 Market at Eighth Streets, Bloomsburg is honored to be serving the O'Brien family. Memorial contributions in John's name are suggested to: COVID Relief Associations, or American Diabetes Association P.O. Box 7023 Merrifield, VA 22116 7023.

John J. O'Brien Sr., age 71, of Lightstreet, passed away on Monday, December 28, 2020, a patient of the Geisinger Medical Center in Danville. John was a resident of Lightstreet for most of his life. He was born on Monday, June 20,... View Obituary & Service Information

The family of John J. O'Brien Sr. created this Life Tributes page to make it easy to share your memories.

Send flowers to the O'Brien family.