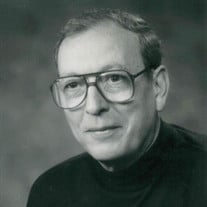 Dr. John P. Master, age 90, a resident of Vintage Knolls in Danville, passed away on Sunday evening, August 9, 2020, surrounded by his loving family. Born in Altoona, Pennsylvania on May 21, 1930, Dr. Master was a talented violinist, violist, teacher and conductor. He studied with Paul Sladek, Donald Portnoy, Donald Johanos and Mischa Mischakoff. Dr. Master began his music career as director of the Altoona Chamber Ensemble, became founder and conductor of the Norwalk (Connecticut) Youth Symphony, was Supervisor of Music in the Philadelphia Public Schools and conducted the All-City Junior Orchestra. He became Assistant Professor of Music at McNeese State University in Lake Charles, LA where he conducted the university orchestra and served as concertmaster in several area orchestras. He spent seventeen years as Professor of Music at Bloomsburg University where he taught, directed the Bloomsburg University College-Community Orchestra and performed many solo recitals. After retiring, he and his wife traveled all over the world, moved to Florida then returned to Bloomsburg to be closer to family. Dr. Master is survived by his wife, Catherine, two daughters and four grandchildren. They are daughter Cathie-Jo and son-in-law Milivoj (Mike) Brun, granddaughters Tina and Sonja, and daughter Gretchen, son-in-law Phillip Knittle and grandsons Kyle and Zachary. He was preceded in death by a sister, Mary Ann Rotili and a brother, Edward (Jay) Joseph Master. Graveside Services will be held privately in the Rose Hill Cemetery in Altoona, Pennsylvania with Military Honors. The Allen Funeral Home, Inc., 745 Market at Eighth Street in Bloomsburg is honored to be serving the Master family. Memorial contributions in Dr. Master's name are suggested to: AGAPE,19 East 7th St. Bloomsburg, PA 17815.

Dr. John P. Master, age 90, a resident of Vintage Knolls in Danville, passed away on Sunday evening, August 9, 2020, surrounded by his loving family. Born in Altoona, Pennsylvania on May 21, 1930, Dr. Master was a talented violinist,... View Obituary & Service Information

The family of Dr. John P. Master created this Life Tributes page to make it easy to share your memories.

Send flowers to the Master family.