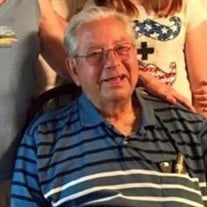 John B. "Jack" Krohn, Jr., age 83, of Orangeville, passed away on Monday, May 25, 2020, surrounded by his loving family at the Geisinger Medical Center in Danville. Jack was a resident of his home in Orangeville for over 7 years and previously resided in Harrisburg. He was born on Monday, November 16, 1936 in Harrisburg, a son of the late John Ben and Margie Jane (Shoop) Krohn. Jack graduated from the John Harris High School, Harrisburg in 1954 and honorably served his country in the Army National Guard. In June, 1982, Jack married his loving wife, the former Bonnie Jane Savage, who preceded him in death on July 6, 2012. He was employed by Novingers Inc., Harrisburg as a Metal Lather until his retirement in 2001. Jack was a member of the American Legion, VFW, Progress Fire Co., Harrisburg, Masonic Lodge, and The Berwick Russian Glee Club. He enjoyed spending his time hunting, fishing, and running remote control cars. He was a skilled craftsman and always had a building project to keep him busy. He loved his Westie "Mac" and all his granddogs. His greatest joy was spending time with his family and friends. In addition to his parents and wife, Jack was also preceded in death by a brother, Robert "Butch" Krohn. Survivors include his four children; J. Michael Krohn and wife Carol (Baker) of Bloomsburg, Cindy Jo Wilson of Orangeville, Jaymee L. wife of Richard Moreno of Apex, NC, Michael P. Haas and wife Heidi of Harrisburg, five grandchildren, Mitchell Haas, Gabriel Moreno, Evelyn Moreno, Rachel Haas, Rebecca Haas and a sister, Joan Cover of Harrisburg. Due to the recent events and the current CDC guidelines, a celebration of Jack's life will be held privately. Jack's family apologizes for restricting his family and friends from paying respects at this time. The Allen Funeral Home, Inc., 745 Market at Eighth Streets, Bloomsburg is honored to be serving the Krohn family. Memorial contributions in Jack's name are suggested to: Animal Resource Center PO Box 439, Bloomsburg, PA, 17815.

John B. "Jack" Krohn, Jr., age 83, of Orangeville, passed away on Monday, May 25, 2020, surrounded by his loving family at the Geisinger Medical Center in Danville. Jack was a resident of his home in Orangeville for over 7 years and... View Obituary & Service Information

The family of John B. "Jack" Krohn Jr. created this Life Tributes page to make it easy to share your memories.

Send flowers to the Krohn family.