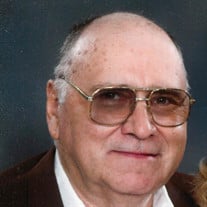 John R. Adler, age 80, of Bloomsburg, died on Friday, February 2, 2018, at his Main Township home surrounded by his family. John was born on Sunday, July 18, 1937 in Scranton, a son of the late Jack and Olwen (Ruch) Adler. John graduated from the Scranton Tech High School in 1954. Following High School, he faithfully served his country in the US Navy Reserve from 1955 to 1963 as a medical corpsman. Following his military service, John expanded his education by attending Williamsport Technical School and was certified as a licensed Aircraft Mechanic. He was employed by the Montoursville Airport and Bloomsburg Airport. He later operated his private aircraft repair station. He then operated a general machine shop, tack shop and private welding business from his Main Township location. He conducted a Pennsylvania Act 235 Lethal Weapons Training Act Facility. As a woodworker, John was a cabinetmaker and was contracted by local businesses, including The Inn at Turkey Hill. As a public servant, John was a Main Township Supervisor for 28 years. He was a founding member of the Main Township Volunteer Fire Co. where he is a life member. He was a board member of the Columbia County Daycare Board. In 1986, John became the first Republican to be elected as Columbia County Sheriff. John was a life member of the Mainville Sportsmen Club. He was also a member of NRA. On April 20, 1974, John married the former Linda Baylor of Main Township. Survivors include his beloved wife of 43 years, Linda Adler; two children: Virginia Cook of Helena, AL and J. Colby Adler and wife, Vanessa, of Catawissa; two grandchildren: Thea Anne Cook and Mason Adler Cook. A time of Remembrance and Celebration of John's life will be announced in the Spring until then, "Keep your powder dry." The Allen Funeral Home, Inc. is honored to be serving the Adler family. Memorial contributions in John's name are suggested to: Main Township Volunteer Fire Co., 2234 Fire Hall Lane, Bloomsburg, PA 17815. Friends and family wishing to send a memorial gift, share a personal memory or offer condolences to the family, a Memorial Tribute Page in John’s honor and a Sympathy Store are available at www.Allen FuneralHome.com.

John R. Adler, age 80, of Bloomsburg, died on Friday, February 2, 2018, at his Main Township home surrounded by his family. John was born on Sunday, July 18, 1937 in Scranton, a son of the late Jack and Olwen (Ruch) Adler. John graduated... View Obituary & Service Information

The family of John R. Adler created this Life Tributes page to make it easy to share your memories.

Send flowers to the Adler family.