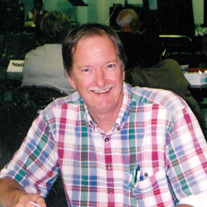 Jimmy Lee Rupert, age 74, of Bloomsburg, passed away on Sunday, January 24, 2021 at The Gardens of Orangeville, after fighting a courageous battle with physical complications following an unfortunate fall on July 4, 2011. Throughout this difficult time, he maintained a positive attitude and an admirable sense of humor which impressed all those who visited him. He was born on Sunday, December 29, 1946 in Bloomsburg, a son of the late George L. and Prudence H. (Lore) Rupert. Jim graduated from Bloomsburg High School in 1964 and Bloomsburg University in 1968, where he earned his B.A. in English. On June 26, 1982, Jim married his loving wife, the former Victoria A. "Vicky" Humphreys who preceded him in death on November 21, 2016. He taught for three years in the Benton School District where he coached basketball and baseball. For most of his teaching career, he taught at Central Columbia School District. He was most proud of his work with Drug and Alcohol programs. In 1974, he co-founded a drug intervention program and a student assistant program at Central Columbia High School. He also served on the Behavioral Health Advisory Board (BHAB) for CMSU and was the Administrative Director for drug and alcohol programs for several years. Jim enjoyed being the lead singer in several area bands for many years. Most notable was The Last Chance Band. His audiences were entertained as much with his repartee as his singing! Jim was a longtime member of the First English Baptist Church, Bloomsburg where he served on a variety of boards and held many offices. He taught Sunday School and sang in the choir. Jim also founded the church's first Praise Band. He was a member of the Bloomsburg Elks Lodge #436 and a member of the former Bloomsburg Moose Lodge. Each week during football season, Jim would be cheering his favorite NFL team the New York Giants! Win or lose, he was a loyal fan. Friends knew not to visit him when a Giant's game was being televised. In addition to his parents, his wife Vickie, Jim was also preceded in death by a brother, Gary Rupert. Survivors include his son, Devon J. Rupert and fiancee Sabrina Marie Gearhart of Bloomsburg and a sister-in-law, Nancy Rupert. Private services will be held at the convenience of the family. The Allen Funeral Home, Inc., 745 Market at Eighth Streets, Bloomsburg is honored to be serving the Rupert family.

Jimmy Lee Rupert, age 74, of Bloomsburg, passed away on Sunday, January 24, 2021 at The Gardens of Orangeville, after fighting a courageous battle with physical complications following an unfortunate fall on July 4, 2011. Throughout this... View Obituary & Service Information

The family of Jimmy Lee Rupert created this Life Tributes page to make it easy to share your memories.

Jimmy Lee Rupert, age 74, of Bloomsburg, passed away on Sunday,...

Send flowers to the Rupert family.