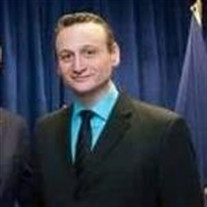 Jesse Robert Steck, age 35, of the Millville area, died on Sunday, July 17, 2016 in Moreland Township, Lycoming County. Jesse was born on Friday, February 27, 1981 in Manchester, Connecticut, a son of Frederick J. and Sue Ann (Seal) Steck of the Millville area. Throughout his younger years, Jesse attended and later graduated from the Millville High School in 1999. During high school, he was employed by the local Original Italian Pizza in Millville. Immediately following high school, Jesse enlisted in the United States Navy for four years. Jesse always had a passion for expanding his education, especially in politics. He was currently attending the University of Rochester with a major in political science as well as anticipating his graduation approaching this semester. In accordance with his love of politics, Jesse was currently accepted to serve an internship with the local Democratic Party. In addition to politics, Jesse was an aspiring writer, but his primary love was reading. Whether a trip to the grocery store or an appointment, Jesse could always be seen carrying at least two books under his arm. His love of reading and expanding his knowledge were always his focus. In addition to his parents, Jesse is survived by a brother, Ard A. Michael of Lafayette, LA; an aunt, Debra J. Horrell of Muncy; in addition to many aunts, uncles and cousins throughout the area. A time of Visitation for family and friends will be held on Monday evening, July 25 from 4 to 6 p.m. at the Allen Funeral Home, Inc. 107 W. Main at Railroad Street in Millville. Funeral services will also begin on Monday evening, July 25 at 6 p.m. at the Allen Funeral Home, Inc. in Millville. The Allen Funeral Home, Inc., is honored to be serving the Steck family. Because of his love of books, memorial contributions in Jesse’s name may be made to the Bloomsburg Public Library, in memory of Jesse R. Steck, 225 Market St., Bloomsburg, PA 17815.

The family of Jesse R. Steck created this Life Tributes page to make it easy to share your memories.

Send flowers to the Steck family.