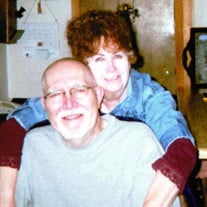 Jerry Richard Collins, Sr., age 75, of Bloomsburg, died on Wednesday, June 8, 2016, a patient of the Geisinger Medical Center in Danville. Jerry was a resident of his home in Hemlock Township for over 51 years. Jerry was born on Tuesday, October 22, 1940 in Littlefield, Texas, a son of the late David and Ada (Mills) Collins. Throughout his younger years, Jerry attended school in Texas and Oklahoma and left high school to serve his country in the military. After 3 1/2 years of faithful service he was honorably discharged from the US Army. On July 8, 1961, Jerry married his loving wife, Shirley M.(Sponenberg) Collins of Buckhorn. For many years, Jerry was employed by Briar Knitting Inc. formerly of Berwick as a mechanic until his retirement in 2003. Prior, he was an automotive mechanic at Buckhorn Garage for most of his working life. Jerry was a member of the Buckhorn Lutheran Parish. He was also a member of the Bloomsburg Archery Club and the American Bowling Congress. Jerry was an avid bowler and avid archer. He was known for his fondness of video games and classic Western Movies. In addition to his parents, Jerry was also preceded by two sisters and one brother. Survivors include his beloved wife of nearly 55 years, Shirley M.Collins of Bloomsburg, a daughter, Tammy L. Price of Bloomsburg, PA, two sons: Jerry R. Collins, Jr. and wife, Tina of Annville and Robby L. Collins and wife, Heidi, of Mifflinville; 9 grandchildren, 3 great grandchildren, and a brother, Eddie Collins and wife, Sandy, of Oklahoma. Private services will be held at the convenience of the family. The Allen Funeral Home, Inc., is honored to be serving the Collins family. Memorial contributions in Jerry's name are suggested to: Wounded Warrior Project P.O. Box 758517 Topeka, KS 66675 or St. Jude Children's Research Hospital 501 St. Jude's Place Memphis, TN 38105.

Jerry Richard Collins, Sr., age 75, of Bloomsburg, died on Wednesday, June 8, 2016, a patient of the Geisinger Medical Center in Danville. Jerry was a resident of his home in Hemlock Township for over 51 years. Jerry was born on Tuesday,... View Obituary & Service Information

The family of Jerry R. Collins, Sr. created this Life Tributes page to make it easy to share your memories.

Send flowers to the Collins, family.