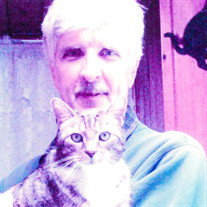 Jeffrey P. Kiefer, age 63, of Bloomsburg, passed away on Wednesday, October 10, 2018, at his residence. Jeff was a resident of his home in Bloomsburg since 2010. He was born on Sunday, March 27, 1955 in Brooklyn, NY, a son of the late Paul and Lydia (Schvedoff) Kiefer. Jeff graduated from the Southern Columbia High School in 1973. In 1989, Jeff married his loving wife, the former Mia L. Sitler. For over 8 years, he was employed by Geisinger Medical Center, Danville in the Supply Chain Department until his retirement in 2016. Jeff enjoyed spending his time doing fine detail carpentry, he was an avid fisherman, he was known as a gardener most notable was his iris bed containing 47 varieties. He was an accomplished baker especially of bread and he loved his rescued cats, especially his best buddy Cooper. In addition to his parents, Jeff was also preceded by a brother, Garrett Kiefer. Survivors include his beloved wife of 29 years, Mia L. Kiefer at home, two brothers, Paul A. Kiefer and wife Wilma of Downingtown, PA; Russell T. Kiefer and wife Darlene of Mifflinburg. Services will be private at the convenience of the family. The Allen Funeral Home, Inc., 745 Market at Eighth Streets, Bloomsburg is honored to be serving the Kiefer family. Memorial contributions in Jeff's name are suggested to: Animal Resource Center PO Box 439 Bloomsburg, PA 17815. Friends and family wishing to send a memorial gift, share a personal memory or offer condolences to the family, a Memorial Tribute Page in Jeff’s honor and a Sympathy Store are available at www.Allen FuneralHome.com.

The family of Jeffrey P. Kiefer created this Life Tributes page to make it easy to share your memories.

Jeffrey P. Kiefer, age 63, of Bloomsburg, passed away on Wednesday,...

Send flowers to the Kiefer family.