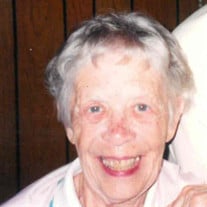 Jean T. Quinn , age 95, of Northumberland, died on Monday, September 4, 2017, a resident of Nottingham Village, Northumberland for over 7 years and was formerly of Catawissa. Jean was born on Wednesday, April 26, 1922 in Danville, PA a daughter of the late Cyril and Anna (Reice) Trivelpiece. Throughout her younger years, Jean attended the Danville area schools, and later graduated from Danville High School in 1940. Jean expanded her education by attending Mansfield State Teachers College, and graduated with a Bachelor's Degree in 1944. For over 10 years, Jean was a faculty member of John F. Kennedy High School, Willingboro NJ until her retirement in 1978. Jean was a member of the Catawissa United Methodist Church. She enjoyed spending her time knitting and received two Pennsylvania State awards for creative writing. In addition to her parents, Jean was also preceded by her husband, Herbert Quinn, in 2002 and her son, David Quinn, in 2011. Survivors include her daughter, Deborah White and husband, Gerald, of Delran, NJ; daughter in law, Jeanne Quinn and granddaughter, Lauren Quinn both of Beverly, NJ. Funeral Services will begin on Friday, September 8, 2017 at 2:30 pm at the Allen Funeral Home, Inc., 745 Market at Eighth St., Bloomsburg, with her pastor, Susan Rogutski officiating. Graveside committal services will immediately follow in the Hillside Cemetery, Catawissa. The Allen Funeral Home, Inc., is honored to be serving the Quinn family. Memorial contributions in Jean's name are suggested to the charity of donor's choice. Friends and family wishing to send a memorial gift, share a personal memory or offer condolences to the family, a Memorial Tribute Page in Jean’s honor and a Sympathy Store are available at www.Allen FuneralHome.com.

Jean T. Quinn , age 95, of Northumberland, died on Monday, September 4, 2017, a resident of Nottingham Village, Northumberland for over 7 years and was formerly of Catawissa. Jean was born on Wednesday, April 26, 1922 in Danville, PA a daughter... View Obituary & Service Information

The family of Jean T. Quinn created this Life Tributes page to make it easy to share your memories.

Send flowers to the Quinn family.