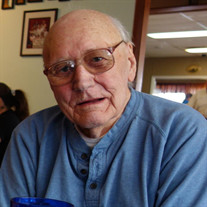 Jay W. Landon, age 91, of Bloomsburg, died on Saturday, October 22, 2016, a patient of the Geisinger Bloomsburg Health Care Center. Jay was a resident of Bloomsburg most of his life. Jay was born on Friday, October 16, 1925 in Bloomsburg, the only child of the late Jay and Hannah (Traub) Landon. Throughout his younger years, Jay attended the Bloomsburg area schools, and later graduated from the Bloomsburg High School in 1943. In his youth, Jay was employed at Magee's garage and during World War II he worked at AC&F in Berwick. For over 40 years he was owner and operator of Landon Motors on Montour Boulevard, until his retirement in 1995. On August 30, 1952, Jay married his loving wife, Marie (Lonser) Landon of Bloomsburg. They recently celebrated 64 years of marriage. Jay was a member of the St. Luke Lutheran Church. He was also a member of the Washington Lodge #265 F&AM and Caldwell Consistory, both of Bloomsburg. Jay enjoyed spending time with his family, especially his grandsons. He was an avid Penn State fan and he enjoyed fishing trips and reminiscing about time spent in Florida. He said as a young man that he got "Florida sand in his shoes". Survivors include his beloved wife, Marie Landon of Bloomsburg; son, James Landon and wife, Judith Bendersky, of Anchorage, AK, daughter, Judy Ohl and husband, Frank, of Orangeville, daughter, Lynn Cromley and husband, Robert, of Bloomsburg, PA, and son, Robert Landon and wife, Jessica, of Springfield, VA; seven grandsons:, Eric Landon, Brian Landon, Aaron Ohl, and fiancee, Anh Tran, Jesse Cromley and fiancee, Crystal Zhao, Cory Ohl, Alexander Cromley, and Joseph Landon. A time of Visitation for family and friends will be held on Tuesday, October 25, 2016 from 6:00 pm to 7:30 pm at the Allen Funeral Home, Inc. 745 Market at Eighth St., Bloomsburg. Masonic services will be held at 7:30 pm. Funeral Services will begin on Wednesday, October 26, 2016 at 10:00 am at St. Luke Lutheran Church, 7 St. Luke Way, Bloomsburg, with interim pastor, Rev. John Fenton, officiating. Graveside committal services will immediately follow. The Allen Funeral Home, Inc., is honored to be serving the Landon family. Family will provide flowers, memorial contributions in Jay's name are suggested to: Columbia Montour Hospice 410 Glenn Ave., Suite 200 Bloomsburg, PA 17815.

The family of Jay W. Landon created this Life Tributes page to make it easy to share your memories.

Send flowers to the Landon family.