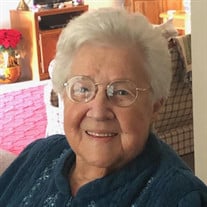 Janet M. McLaughlin, age 99, of Bloomsburg, passed away peacefully on Friday, August 13, 2021, at her Scott Twp. home. Janet was a resident of her home in Espy for the past 20 years, formerly of the Catawissa and Bloomsburg areas. She was born on Sunday, April 16, 1922 in Montgomery, a daughter of the late Samuel C. and M. Lillian (Bibleheimer) Shank. Janet graduated from the Catawissa High School in 1940 where she was captain of the ladies basketball team and was also a May Queen. Janet expanded her education by graduating from the Bloomsburg State Teachers College in 1944. She faithfully served her country during World War II as a Specialist "S" with the U.S. Navy. She was stationed in Portsmouth and Norfolk, Virginia and was honorably discharged in 1945. On March 3, 1945, Janet married her loving husband, Cornelius "Neil" P. McLaughlin who preceded her in death on July 10, 1982. Janet was a member of St. Columba Catholic Church, Bloomsburg where she served as the organist until 1995 with over 20 years of service. She was a member of the Catholic Daughters, the Parish Council Of Women, was a volunteer for The Red Cross, and an AARP member. She was also a member of the Catawissa American Legion, the Geisinger Bloomsburg Hospital Auxiliary, and Bloomsburg Alumni Association. An avid Phillies and Eagles fan, she enjoyed spending time with her family, celebrating community gatherings with her neighbors, playing solitaire and solving crossword and word search puzzles. In addition to her parents and husband, Janet was also preceded in death by a sister, Maxine Keller. Survivors include her four beloved children, Thomas C. McLaughlin and wife Cheryl of Somerset, OH, Maureen A. Fitzgerald of Bloomsburg, Maryann McLaughlin of Bloomsburg, Molly A. wife of Todd Kreisher of Bloomsburg, nine grandchildren and six great grandchildren. A time of visitation for family and friends will be held on Friday, September 3, 2021 from 9:00 am to 10:00 am at the Allen Funeral Home, Inc., 745 Market at Eighth Streets, Bloomsburg. Funeral services will begin on Friday, September 3, 2021 at 10:00 am at the Allen Funeral Home, Inc. with Rev. Richard J. Mowery, officiating. Graveside committal services will immediately follow in New Rosemont Cemetery, Espy with military honors being presented by a combined VFW and American Legion group. The Allen Funeral Home, Inc., is honored to be serving the McLaughlin family.

Janet M. McLaughlin, age 99, of Bloomsburg, passed away peacefully on Friday, August 13, 2021, at her Scott Twp. home. Janet was a resident of her home in Espy for the past 20 years, formerly of the Catawissa and Bloomsburg areas. She... View Obituary & Service Information

The family of Janet M. McLaughlin created this Life Tributes page to make it easy to share your memories.

Send flowers to the McLaughlin family.