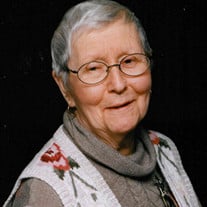 Janet I. Fisher, age 101, of Berwick, died on Thursday, September 1, 2016, a patient of the Elmcroft Senior Living of Berwick. Janet was a former resident of Danville and Bloomsburg. Janet was born on Wednesday, July 14, 1915 in Riverside, a daughter of the late Philip M Irey, Sr. and Blanche (Sechler) Irey. Janet graduated from Danville High School in 1938. She expanded her education by attending Indiana University of Pennsylvania graduating with a degree in Music Education. For over 20 years, Janet was employed by Bloomsburg School District as a Music Teacher until her retirement in 1979. Janet was a member of the Good Shepherd Lutheran Church, Berwick. She was also a long time member of St. Matthew Lutheran Church, Bloomsburg, where she was former Minister of Music, director of the adult and children's choirs and organist. In 1952, Janet wrote "Onward Bloomsburg" the anthem of Bloomsburg's susquecentenial. In 2002 she was selected to be Grand Marshall of Bloomsburg's Bi centennial parade along with then Governor Mark Schweiker. She played her cello with Bloomsburg University Orchestra and for musicals performed at Bloomsburg High School. Well into her 90's she played her cello with the musical group "Brighter Light" of Berwick. As a young girl she was selected as Pennsylvania's best cellist. Her father introduced her to Albert Einstein at the age of 9 in the city of Chicago. In addition to her parents, Janet was also preceded by her first husband J. Wesley Knorr; her second husband, W. Sheldon Fisher; daughter, Barbara Williard, grandson: Brian Williard and brothers: Dr. N. Sumner Irey and Dr. Philip M. Irey, Jr.. Survivors include her sons, John W. Knorr, and wife, Susan of Galloway, NJ and Thomas P. Knorr and wife, Gail, of Pen Argyl, PA, 13 grandchildren, 12 great grandchildren and step son, Gary S. Fisher of Florida. A time of Visitation for family and friends will be held on Saturday, September 10, from 10 to 11 am at Good Shepherd Lutheran Church, 1600 Fowler Ave. Berwick. Funeral Services will begin at 11:00 am at Good Shepherd Lutheran Church with her pastor, Rev. David Kingsborough, officiating. Graveside committal services will immediately follow in the Pine Grove Cemetery, Walnut St. Berwick. The Allen Funeral Home, Inc., is honored to be serving the Fisher family. Memorial contributions in Janet's name are suggested to: Brighter Light c/o Good Shepherd Lutheran Church 1600 Fowler Ave. Berwick, PA 18603.

Janet I. Fisher, age 101, of Berwick, died on Thursday, September 1, 2016, a patient of the Elmcroft Senior Living of Berwick. Janet was a former resident of Danville and Bloomsburg. Janet was born on Wednesday, July 14, 1915 in Riverside,... View Obituary & Service Information

The family of Janet I. Fisher created this Life Tributes page to make it easy to share your memories.

Send flowers to the Fisher family.