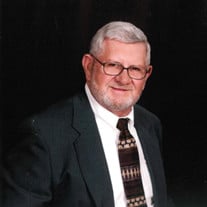 James A. "Jim" Turner, Sr., age 86, of Bloomsburg, passed away on Tuesday, May 11, 2021, at his South Centre Twp. home under the care of Geisinger hospice. Jim was a resident of Bloomsburg all of his life. He was born on Wednesday, June 6, 1934 in Bloomsburg, a son of the late Ellis H. and Minnie (Melick) Turner. Jim graduated from the Bloomsburg High School in 1952. For over 35 years, Jim was employed by Bloomsburg Mills as a truck driver until his retirement in 2000. He was a faithful member of St. John's Lutheran Church, Mifflinville. Jim was also a member of the Bloomsburg Elks Lodge #436, the former Moose Lodge #623, a social member of Bloomsburg American Legion and V.F.W. He was also a member of the Lime Ridge Fire Company, Mifflinville Forest Rangers, the former Friendship Fire Company, Fireman's Relief Association and The Bloomsburg Fair Association, where he was a longtime employee and was named 2010 Outstanding Fair Ambassador. Jim enjoyed spending his time hunting, golfing, watching NASCAR, Penn State football games and spending time with his grandchildren. In addition to his parents, Jim was also preceded in death by four siblings; Fred C. Turner, Merle B. Turner, Helen T. Shuman, and Eilean F. Ashenfelder. Survivors include his beloved wife, Darlene Y. Turner, two sons, Jeffrey O. Turner and wife Donna of Bloomsburg, James A. "Jim" Turner, Jr. and his significant other, Heather Kowalski of Mifflinville, three grandchildren, Nicholas J. Turner and wife Hannah, Katherine G. Turner and boyfriend, Sawyer Brown, Matthew P. Turner, a brother, Jon E. Turner and wife Shirley of Bloomsburg, two sisters, Elaine K. Snyder of Selinsgrove, and D. Jane wife of Herbert Fritz of Orangeville. A time of visitation for family and friends will be held on Sunday, May 16, 2021 from 4:00 pm to 6:00 pm at the Allen Funeral Home, Inc. 745 Market at Eighth streets, Bloomsburg. Elks memorial service will be conducted at 5:45 pm. Funeral services will begin on Monday, May 17, 2021 at 10:00 am at St. John's Lutheran Church, Fifth and Race Streets, Mifflinville with Rev. Chad A. Hebrink, officiating. Graveside committal services will immediately follow in the New Rosemont Cemetery, Bloomsburg. The Allen Funeral Home, Inc., is honored to be serving the Turner family. Memorial contributions in Jim's name are suggested to: St. John's Lutheran Church, PO Box B, Mifflinville, PA 18631 or Bloomsburg Elks Lodge, 1223 Old Berwick Road, Bloomsburg, PA 17815.

James A. "Jim" Turner, Sr., age 86, of Bloomsburg, passed away on Tuesday, May 11, 2021, at his South Centre Twp. home under the care of Geisinger hospice. Jim was a resident of Bloomsburg all of his life. He was born on Wednesday,... View Obituary & Service Information

The family of James A. "Jim" Turner Sr. created this Life Tributes page to make it easy to share your memories.

Send flowers to the Turner family.