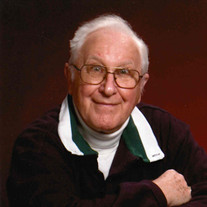 James D. "Jim" Bankes, age 88, of Mainville, passed away on Wednesday, March 27, 2019, a patient of the Grandview Health and Rehabilitation Center in Danville. Jim was a resident of his home in Mainville for over 50 years. He was born on Thursday, February 26, 1931 in Bloomsburg, a son of the late Paul and Sarah (Fisher) Bankes, Sr. Jim graduated from Ben Franklin High School, Philadelphia in 1950. He faithfully served his country as a Corporal in the U.S. Army during the Korean Conflict and was honorably discharged in 1954. On July 5, 1958, Jim married his loving wife, the former Jean Longenberger. For many years, Jim was employed by the former Magee Carpet Co. and the former Champion Valley Farms, Bloomsburg until his retirement in 1993. Jim was a member of the Emanuel Lutheran Church, Mainville. He was also a member of the Oriental Lodge #460, F & A M , Orangeville, the American Legion Post #273, Bloomsburg, and the Main Twp. Fire Co. He loved watching the Philadelphia Eagles and was ecstatic to have lived long enough to see them win the Super Bowl in 2018. Jim loved his family especially his grandsons and enjoyed drinking beer and watching movies especially John Wayne. In addition to his parents, he was also preceded by a brother, Richard Bankes, and two sisters, Beverly Kelz, and Joanne Bitting. Survivors include his beloved wife of 60 years, Jean Bankes at home, a daughter, Pamela J. Keller of Bloomsburg, two grandsons, Jared W. J. Keller and wife Leonilde of Camp Hill, and Jordan D. J. Keller and wife Kayla of Flemington, NJ, a brother, Paul Bankes, Jr. and wife Sandy of Colorado Springs, CO, several nieces and nephews; and all the lives he touched on his journey. Jim will always be in our hearts. A time of Visitation for family and friends will be held on Friday, April 5, 2019 from 5:00 pm to 6:00 pm at the Allen Funeral Home, Inc., 745 Market at Eighth Streets, Bloomsburg with Masonic Memorial Services being presented by the Oriental Lodge #460 F & A M at 6:00 P.M. Funeral Services will begin on Saturday, April 6, 2019 at 3:00 pm at the Emanuel Lutheran Church, 112 Maple Drive, Bloomsburg with his pastor, Rev. Christine Kirchner, officiating. Graveside committal services will immediately follow in the New Rosemont Cemetery, Bloomsburg. A combined American Legion and VFW contingent will provide military honors. The Allen Funeral Home, Inc., is honored to be serving the Bankes family. Memorial contributions in Jim's name are suggested to: Emanuel Lutheran Church, 112 Maple Drive, Bloomsburg, PA 17815. Friends and family wishing to send a memorial gift, share a personal memory or offer condolences to the family, a Memorial Tribute Page in Jim’s honor and a Sympathy Store are available at www.Allen FuneralHome.com.

James D. "Jim" Bankes, age 88, of Mainville, passed away on Wednesday, March 27, 2019, a patient of the Grandview Health and Rehabilitation Center in Danville. Jim was a resident of his home in Mainville for over 50 years. He was born on... View Obituary & Service Information

The family of James D. "Jim" Bankes created this Life Tributes page to make it easy to share your memories.

Send flowers to the Bankes family.