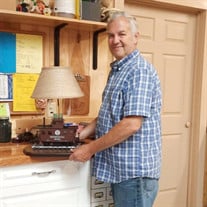 On Thursday, August 26th, 2021, James "Jim" D. Aucker age 65, passed away at his home after a short, courageous battle with cancer. He was surrounded by loved ones and under the care of the Commonwealth Hospice of Berwick. To live a life with no regrets is to live a life well lived. Jim lived the best life of all. Jim was born in Lykens, Pa. The son of the late James R Aucker and Dawn (Williard) Aucker. Jim grew up in Bloomsburg, graduating from Bloomsburg Area High School in 1974. The friends he got in trouble with then, would prove to be lifelong friends. In his teenage years he developed a love of plants and horticulture became a focus. He briefly attended Williamsport Area Community College to further expand his knowledge. It was at this time Jim found his passion of beekeeping beginning in 1979. What started as a hobby blossomed into an enterprise that gave him great pride. In 1987 Jim married his soul mate, Brenda Morris, formerly of Berwick. At that time Aucker’s Apiary was successfully created being one of the largest producers of honey in Pennsylvania. Since his former hobby became a career, Jim began a new hobby of raising birds. What began as backyard chickens turned into raising exotic pheasants, peacocks, swan, and ducks. He had a love of the railroad, and all connected with it. He enjoyed many train trips. Early on, Jim discovered he was a naturally gifted carpenter. He built everything from derby cars and dollhouses to his aviary and even two of his houses. You could give him a rough idea of what you needed built and what you got back would far exceed expectations. The simplest pleasures in life brought him the greatest joy. He had an uncanny ability to find happiness in daily activities. Jim was a founding member of The Beekeepers of the Susquehanna Valley, a member of the Pennsylvania Aviculture Society, and on the reunion committee for the Bloomsburg Class of ’74. While Jim was a busy man, he would drop everything to help a friend, family member, or stranger. Anyone who knew Jim, knew he was an incredibly kindhearted, gentle soul with a unique sense of humor. He was a constant source of positivity. His presence is sorely missed, and the loss deeply felt. Survivors include his loving wife Brenda Aucker of Millville. His daughter/partner in crime, Angelique Aucker, and her partner Adam Smith of Millville. His feline children Athena, Scooter, Cubby Lynn, Paisley, & Octavia Aucker of Millville. His mother Dawn Aucker of Orangeville. His sisters, Lisa Kinley and her husband Richard of Bloomsburg and Susan Aucker of Bloomsburg. His brothers, Jeff Aucker and wife Lisa of Dubois and Matt Aucker and wife Ronna of Bloomsburg. He is also survived by his beloved granddog Sammy Aucker of Millville, his nieces Amanda, Myriah, Ciera, Maria, and Reagan; his nephews Brian, Zach, Payton, Dane, & Griffin. The family wishes to send their gratitude to Dr. Robert Meloy. His kindness, compassion, and comfort were greatly appreciated by Jim and his family in the final days. At his request a ceremony celebrating his life with be held on October 16th at 2pm at Aucker’s Apiary, located at 226 Hemsarth Rd, Millville, PA. Anyone wishing to honor his memory is invited to attend. The Allen Funeral Home, Inc, 107 W Main Street, Millville is honored to be serving the Aucker family. At the family’s request, memorial contributions can be made in Jim’s name to the charity of the donor’s choice.

On Thursday, August 26th, 2021, James "Jim" D. Aucker age 65, passed away at his home after a short, courageous battle with cancer. He was surrounded by loved ones and under the care of the Commonwealth Hospice of Berwick. To live a... View Obituary & Service Information

The family of James "Jim" D. Aucker created this Life Tributes page to make it easy to share your memories.

Send flowers to the Aucker family.