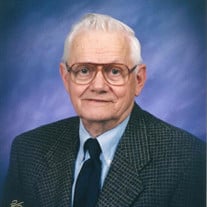 Herbert T. Good, age 99, of Bloomsburg, passed away on Thursday morning, October 1, 2020. Herb was a resident of his home in Scott Twp. for over 50 years. He was born on Wednesday, December 29, 1920 in Jonestown, a son of the late J. Bruce and Anna Good. Herb graduated from the Benton High School in 1939 and proudly served his country during WW II attaining the rank of Sergeant in the U.S. Marine Corps from August 8, 1942 until he was honorably discharged on December 3, 1945. On July 2, 1949 Herb married his loving wife, the former Doris D. Deeter, they were married for 61 years until her death in January, 2011. Herb was a longtime employee of Magee Carpet Company working in various departments until his retirement as an electrician in August, 1988. Herb was a longtime member of the Bloomsburg Christian Church and a former member of the Bloomsburg Archery Club. Herb was also a member of the former Susquehanna Valley World War II Veterans group. He enjoyed singing and playing his musical instruments with a nursing home ministry known as Faith and Friends. He enjoyed many hobbies in his lifetime. He was an archer, and an amateur radio operator for several years and enjoyed communicating with people from across the country. Photography was his lifelong hobby. In his later years he was a wood carver, carving birds and decorating musical instruments (that he made) with duck and eagle wood burnings. In addition to his parents and wife, Herb was also preceded in death by two sisters, Dorothy Umfer, Jacqueline Hamrick, and a brother, Dean Good. Survivors include his two children; a daughter, Pamela K. Good of Bloomsburg, a son, Rodney W. Good and wife Cynthia of Bloomsburg, two grandchildren, Nicole DuMond of Benton, Joshua Good of Norristown, two great grandchildren, Aiden J. George of Benton, Savannah N. DuMond of Benton, two brothers, Clifford Good and wife Betty of IL, Ralph Good and wife Shirley of Orangeville, and a sister, Rosemary Martin of TX. Private services will be held at the convenience of the family. He will be laid to rest next to his beloved wife in New Rosemont Cemetery, Espy with military honors. The Allen Funeral Home, Inc., 745 Market at Eighth Streets, Bloomsburg is honored to be serving the Good family. Memorial contributions in Herbert's name are suggested to: Bloomsburg Christian Church Memorial Fund, 107 Deussen Drive, Bloomsburg, PA 17815

Herbert T. Good, age 99, of Bloomsburg, passed away on Thursday morning, October 1, 2020. Herb was a resident of his home in Scott Twp. for over 50 years. He was born on Wednesday, December 29, 1920 in Jonestown, a son of the late J. Bruce... View Obituary & Service Information

The family of Herbert T. Good created this Life Tributes page to make it easy to share your memories.

Herbert T. Good, age 99, of Bloomsburg, passed away on Thursday...

Send flowers to the Good family.