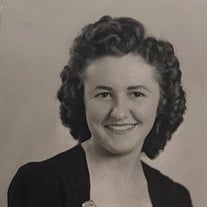 Helen Hasay Heller, 96, of Bloomsburg PA and recently of Bluffton SC, passed away on September 15, 2020 and rejoined her husband and family awaiting her in Eternal Life. Helen was born on March 11, 1924 in Red Hill, PA. She was one of 8 children born of Mary Paciga and George Hasay, who were immigrants from Kacvin, Slovakia. Helen graduated from Huntington Mills High School and continued on to Empire Beauty School to become a licensed cosmetologist. During WWII, she worked at the American Car and Foundry (ACF) in Berwick where tanks were assembled. Helen met her future husband LaRue “Louie” Heller in Berwick, PA, who was co owner of Heller’s Bottled Gas in Wapwallopen, PA. Helen and Louie were married on March 31, 1951 and resided in Bloomsburg. Throughout her life, Helen was very active in the community. She was a charter member of the PA Sheriff’s Association and a charter member of the Bloomsburg Elkettes, where Helen founded the Ladies’ Auxiliary. Helen was a life member of the American Legion Auxiliary and the Benton VFW Auxiliary. She was actively involved in the Bloomsburg Moose where both she and Louie bowled on leagues for many years. Helen worked on the 5th ward Election Board for many years. In 1969, she began to work in the Concession Office for the Bloomsburg Fair, and she continued this job for 46 years. Helen was an active and long standing member of St. Columba Catholic Church where she helped with finances and always enjoyed making homemade pierogis. She was also a member of the St Columba Voyagers. Helen liked to cook and was known by family and friends for her famous macaroni and cheese. In her spare time, Helen liked to crochet, garden, and play bingo with her best friend, Bev. Until the very end, Helen lived an active and social lifestyle. Helen and Louie had season tickets to Penn State football games and attended home games and many Bowl Games. They had many friends and enjoyed playing cards, bowling, hosting parties, and traveling. For seven years, Helen and Louie traveled to Octoberfest in Germany where they created lasting friendships. After Louie passed away in 1986, Helen continued living an active life by traveling more extensively with family and friends. She journeyed through Europe, to China, and to her parents’ village in Slovakia where she met many of her relatives. Helen also went on cruises as well as golf and bowling trips. When Helen discovered her love of golf, she participated in golf leagues and tournaments at Arnold’s and Rolling Pines Golf Courses where she was sought after for her whiskey fermented cherries. Helen was always known for having fun, dancing, and living her life to the fullest. When her family had young children, she quickly became the favorite aunt and adopted the nicknames “Aunt Tootsie” and “HaHa” and taught each generation of children to polka. Even into her 80s, Helen never stopped dancing, and we are sure she is dancing now with her sister, Anna. Helen’s family meant the world to her. She will always be remembered for her kind and generous heart and for always being there when her family needed her. She always had something comical to say to brighten anyone’s mood. Helen was preceded in death by her beloved husband, Louie; her parents, Mary and George; her brothers, Andrew, Joseph, and John; her sisters, Mary and Anna; and her nephew, Andrew. She is survived by her sisters, Irene Kropiewnicki and Sophie Gabana and many nieces and nephews, grandnieces and nephews, and great grandnephews and niece. A Mass of Christian Burial will begin on Thursday, September 24, 2020 at 10:00 am at St. Columba Catholic Church, 342 Iron St., Bloomsburg, with Monsignor Robert E. Lawrence, celebrant. Graveside committal services will immediately follow in the Old River Church Cemetery, Wapwallopen. Memorial contributions in Helen's name are suggested to: St. Columba Catholic Church, 342 Iron St., Bloomsburg. The Allen Funeral Home, Inc., 745 Market at Eighth Streets, Bloomsburg is honored to be serving the Heller family.

Helen Hasay Heller, 96, of Bloomsburg PA and recently of Bluffton SC, passed away on September 15, 2020 and rejoined her husband and family awaiting her in Eternal Life. Helen was born on March 11, 1924 in Red Hill, PA. She was one... View Obituary & Service Information

The family of Helen Hasay Heller created this Life Tributes page to make it easy to share your memories.

Helen Hasay Heller, 96, of Bloomsburg PA and recently of Bluffton...

Send flowers to the Heller family.