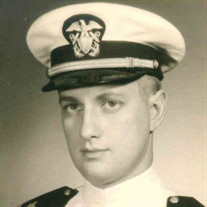 H. Rodney "Rod" Erwine, age 87, of Bloomsburg, passed away on Tuesday morning, September 14, 2021, at his home under the care of Commonwealth Hospice of Berwick. He was born on Friday, September 14, 1934 in Bloomsburg, a son of the late Warren "Bud" and Helen "Pinky" (Hartzell) Erwine. Throughout his younger years, Rod attended the Bloomsburg area schools, and later graduated from the Bloomsburg High School in 1952. He expanded his education by graduating from Gettysburg College in 1956. Rod faithfully served his country in the U.S. Navy from 1957 1960, serving in the Mediterranean Sea with the 6th Fleet as a Line Officer on the USS Salem. He then served as a Flag Lieutenant to the base commander at Guantanamo Bay, Cuba. On September 10, 1960, Rod married his loving wife the former JoAnne H. Hutchins. He was Co-Owner of the family contracting business, Erwine's, Inc., Bloomsburg until 1998 at which time he became Supervisor of Pennsylvania Department of General Services Bureau of Construction until his retirement in 2010. Rod was a member of the Wesley United Methodist Church for over 50 years. He served on the Bloomsburg Planning Commission for 10 years and the Bloomsburg Public Library Board for 10 years. Rod had a wonderful memory and enjoyed telling stories, he and his wife also loved to travel. Survivors include his beloved wife of 61 years, JoAnne H. Erwine, a brother, Gary W. Erwine and wife Joan of Bloomsburg, a nephew, Mattison K. Erwine and wife Kimberley of Bloomsburg, great-niece, Emiley Erwine, great-nephew, Brandon Erwine, great-niece, Gracen Erwine. A time of visitation for family and friends will be held on Thursday, September 23, 2021 from 4:00 pm to 6:00 pm at the Allen Funeral Home, Inc., 745 Market at Eighth streets, Bloomsburg. Funeral services will begin on Friday, September 24, 2021 at 10:00 am at the Allen Funeral Home, Inc. with Rev. Mark F. Reisinger and Todd Davis, officiating. Graveside committal services will immediately follow in the New Rosemont Cemetery, Espy. The Allen Funeral Home, Inc., is honored to be serving the Erwine family. Memorial contributions in Rod's name are suggested to: A charity of the donor's choosing.

H. Rodney "Rod" Erwine, age 87, of Bloomsburg, passed away on Tuesday morning, September 14, 2021, at his home under the care of Commonwealth Hospice of Berwick. He was born on Friday, September 14, 1934 in Bloomsburg, a son... View Obituary & Service Information

The family of H. Rodney "Rod" Erwine created this Life Tributes page to make it easy to share your memories.

Send flowers to the Erwine family.