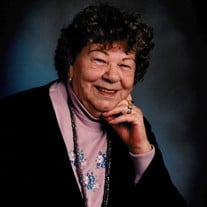 Grace L. McCloughan , age 89, of Bloomsburg, died on Thursday, June 2, 2016, a patient of the Geisinger Medical Center in Danville. Grace was a resident of her home in Bloomsburg for over 70 years. Grace was born on Monday, February 14, 1927... View Obituary & Service Information

The family of Grace L. McCloughan created this Life Tributes page to make it easy to share your memories.

Send flowers to the McCloughan family.