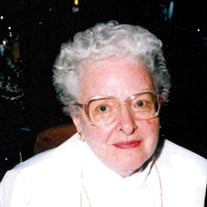 Grace Alberta Crawford, age 89, of Bloomsburg, died on Tuesday, August 29, 2017, at her residence. She was a resident of Bloomsburg for over 29 years. Alberta was born on December 21, 1927 in Danville, a daughter of the late Frank and Ivy (Hartman) Funk. Throughout her younger years, she attended the Danville area schools, and later graduated from the Danville High School in 1945. Alberta expanded her education by graduating from The Bloomsburg State Teachers College in 1949, and Bucknell University, Lewisburg with a Masters Degree in 1963. On, August 25, 1951 Alberta married her loving husband Henry E. Crawford, who preceded her in death on October 2, 2011. She was a teacher in Hughesvile and Muncy Elementary Schools during the 1950's. In 1961 she moved to Connecticut and taught in Stratford Connecticut at Chapel Street School for 26 years until her retirement. She enjoyed knitting, was an avid reader and later in life traveled extensively. Alberta is survived by her two sons; Dale Richard Crawford and wife Joan of Williamsport, PA and Arthur Michael Crawford and wife Diane of Milford, CT, two grandsons, Brandon and Devin Crawford, a brother, Marvin Funk of Danville as well as several nieces and nephews. A time of Visitation for family and friends will be held on Friday, September 1 from 10:00 to 11:00 am at the Canby Lutheran Church, 529 Millertown Road, Bloomsburg. Funeral Services will begin at 11:00 am with Chaplain Michael Delp, Commonwealth Hospice of Berwick, officiating. Graveside committal services will immediately follow in the Canby Lutheran Cemetery. The Allen Funeral Home, Inc., is honored to be serving the Crawford family. Her family would like to extend their deepest gratitude to her caregivers and hospice nurses. Memorial contributions in Alberta's name are suggested to: Henry E. Crawford Scholarship Fund c/o Stratford High School, 45 N. Parade, Stratford, CT 06497 or Canby Lutheran Church c/o Trudy Ashelman, 25 Oriole Road, Orangeville, PA 17859. Friends and family wishing to send a memorial gift, share a personal memory or offer condolences to the family, a Memorial Tribute Page in Alberta's honor and a Sympathy Store are available at www.Allen FuneralHome.com.

Grace Alberta Crawford, age 89, of Bloomsburg, died on Tuesday, August 29, 2017, at her residence. She was a resident of Bloomsburg for over 29 years. Alberta was born on December 21, 1927 in Danville, a daughter of the late Frank and Ivy... View Obituary & Service Information

The family of Grace Alberta Crawford created this Life Tributes page to make it easy to share your memories.