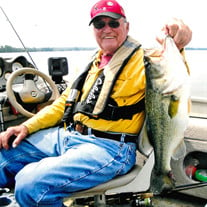 Glenn F. Kinney, age 88, of Jerseytown, died on Monday, April 9, 2018, a patient of the Geisinger Medical Center. Danville. Glenn was a life long resident of Jerseytown. Glenn was born on Saturday, June 29, 1929 in West Hemlock Township, PA, a son of the late Benjamin and Bessie (Ande) Kinney. Throughout his younger years, Glenn attended the Sheeps School. He was married to his wife, the former Doris E. Bennett for 54 years. He lost her to cancer on June 30, 2003. For 22 1/2 years Glenn was a painter at the Danville State Hospital, retiring in 1989. Glenn was known for his gregarious personality, sense of humor and quick wit. He was well known by his nickname of "The Mayor of Jerseytown". He will be greatly missed by his many friends. Glenn enjoyed traveling across the country, with his wife, in their motor home. He also enjoyed fishing trips to Canada with this friends and family. He was an avid turkey and deer hunter. Glenn was a member of the St. Peter Lutheran Church. He was also a Distinguished Member of the Jerseytown Hunting Club with 60 years of membership, a 50 year member of the Oriental Lodge #460 F&AM of Orangeville, Caldwell Consistory of Bloomsburg and a life member of Loyal Order of the Moose. In addition to his parents, Glenn was also preceded by 3 siblings and was the last surviving member of his immediate family. Glenn leaves behind two sons: Roland Kinney and wife, Linda, of Bloomsburg and Keith Kinney and wife, Annette, of Millville; 6 grandchildren and 8 great grandchildren. Graveside Services will begin on Tuesday, April 17, 2018 at 10:00 am in the Columbia HIll Cemetery, Danville, with his pastor Rev. Robert Kerchoff, officiating. The Allen Funeral Home, Inc., 107 West Main at Railroad St., Millville, is honored to be serving the Kinney family. Contributions in memory of Glenn and in honor of Nola are suggested to: Cystic Fibrosis Foundation, Central Pennsylvania Chapter, 600 Corporate Circle #103, Harrisburg, PA 17110. Friends and family wishing to send a memorial gift, share a personal memory or offer condolences to the family, a Memorial Tribute Page in Glenn’s honor and a Sympathy Store are available at www.Allen FuneralHome.com.

The family of Glenn F. Kinney created this Life Tributes page to make it easy to share your memories.

Send flowers to the Kinney family.