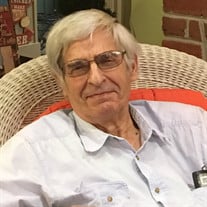 Gerald L. Zamit, age 75, of Bloomsburg, passed away on Monday, July 8, 2019, a patient of the Bloomsburg Care and Rehabilitation Center, surrounded by his loving family. Gerald was a resident of his home in Bloomsburg for 45 years. He was born on Monday, December 27, 1943 in Detroit, MI a son of the late Henry J. Zamit and Miriam (Creasy) Shaffer and his stepfather Claude Shaffer. Gerald graduated from the Berwick High School in 1963. He also attended Wilkes College and the former Bloomsburg State College. On August 17, 1968, Gerald married his wife, the former Judith A. Skomsky, formerly of Berwick, recently celebrated their 50th wedding anniversary in 2018. For over 30 years, Gerald was employed by Stroehmann/Maiers Inc. in Hazleton and Williamsport as a Route Salesman until his retirement in 2001, and was a member of the local union. Gerald was a member of the St. Columba Catholic Church, Bloomsburg. He was also a member of the former Bloomsburg Moose Lodge, and the Knights of Malta. He was an avid fly fisherman and gardener, he also enjoyed vacationing at the beach with his family. Survivors include his wife, Judith A. Zamit at home, two daughters, Lisa A. wife of Jeffrey Long of Danville, and Lynette M. wife of Robert Duncan of Neshanic Station, NJ, four grandchildren, Matthew J. Long, Julia E. Long, Scott C. Duncan, Stephen A. Duncan, a sister, Norma Zamit of San Anselmo, CA, and several cousins. Funeral Services will be private at the convenience of the family with Msgr. Robert E. Lawrence, officiating. Graveside committal services will immediately follow in New Rosemont Cemetery, Espy. The Allen Funeral Home, Inc., 745 Market at Eighth Streets, Bloomsburg is honored to be serving the Zamit family. Friends and family wishing to send condolences to the family, a Memorial Tribute Page in Gerald’s honor is available at www.Allen FuneralHome.com.

Gerald L. Zamit, age 75, of Bloomsburg, passed away on Monday, July 8, 2019, a patient of the Bloomsburg Care and Rehabilitation Center, surrounded by his loving family. Gerald was a resident of his home in Bloomsburg for 45 years. He was... View Obituary & Service Information

The family of Gerald L. Zamit created this Life Tributes page to make it easy to share your memories.

Send flowers to the Zamit family.