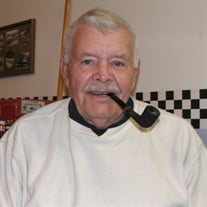 Fred Göte Wesstrom, age 94, of Bloomsburg, passed away on Friday, January 29, 2021, a patient of the Bloomsburg Care and Rehabilitation Center. Fred was born on Friday, April 9, 1926 in Stockholm, Sweden a son of the late Alfredo and Elsa (Johannson) Wesstrom. Fred was raised and educated in Sweden where he served a tour in the Swedish Navy. He apprenticed and became a renowned bespoke tailor. He went on to immigrate to England in the late 40s where he set up shop on the infamous Savile Row creating hand tailored suits for celebrities and dignitaries. He then managed numerous garment manufacturing facilities in the UK and Ireland finally immigrating to the US with his family in 1973 and called Bloomsburg home ever since. He finished his career with London Fog, traveling the world overseeing their quality apparel production until retiring in the mid-1990s. Over the years Fred enjoyed with his family offshore sailing and a passion for golf. In addition to his parents, Fred was also preceded in death by his beloved wife Ida (Price) Wesstrom. Survivors include his four beloved sons: W. Fred Wesstrom and wife Tracey of Purcell, OK, Martin K. Wesstrom and wife Mary of Wilkes Barre, Robin Wesstrom and Nancy VanDeusen of Bloomsburg, Antony Wesstrom and wife Tamara of Morgantown, PA, five grandchildren, Martin F. Wesstrom, Jr. and wife Jane, Stephanie M. Wesstrom, Owen Wesstrom and wife Ronnie, Shannon Wesstrom, Austin Wesstrom, and five great-grandchildren, Aubrey Wesstrom, Collin Wesstrom, Finnegan Wesstrom, Madilyne Croom and Logan Croom. Private services will be held at the convenience of the family. The Allen Funeral Home, Inc., 745 Market at Eighth Streets, Bloomsburg is honored to be serving the Wesstrom family.

Fred Göte Wesstrom, age 94, of Bloomsburg, passed away on Friday, January 29, 2021, a patient of the Bloomsburg Care and Rehabilitation Center. Fred was born on Friday, April 9, 1926 in Stockholm, Sweden a son of the late Alfredo... View Obituary & Service Information

The family of Fred Göte Wesstrom created this Life Tributes page to make it easy to share your memories.

Send flowers to the Wesstrom family.