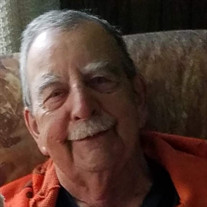 My Dad, Frank G. Crawford, age 90, of Bloomsburg passed away peacefully in our home on Crawford Mountain on Tuesday, 11 August 2020 at 12:30 AM. I’m Larry, his son, and will proudly let you know a little about my Dad. He was born on 27 August 1929 and would have been 91. He married to my Mom, Genevieve (Chernesky) on 27 January 1952 and was married 59 years. Mom passed away on her birthday 20 April 2011. My grandparents were Frank L Crawford and his wife Anna (Harp). Dad had two sisters, Beverly Chapin and Permilla Keeler, who both preceded him in death. Pop (as I called him) graduated from Bloomsburg High School in 1947. He grew up during the Great Depression, so after graduating high school all he wanted to do was work and earn money. He held various job in his early years. Pop was a cab driver, paper boy, delivered milk, and took care of horses at the Bloomsburg Fair grounds. He really enjoyed horses. He would tape their legs for racing, cleaned their stalls and walked them. He then started a career as a barber. His Dad barbered for 60+ years and Pop was going to follow in his footsteps. He had his 2,000 hours of barbering and was prepared to get his license, but TRW opened up in Danville. His Dad told him to apply there for a better wage. For the next 40 years, Pop work at TRW which later became Textron. He retired from there in 1991. Pop loved the outdoors! He was an avid hunter and fisherman. He bagged numerous buck, shot countless rabbits, and netted more fish than you could count. Most important he respected the woods and streams that God created and embraced the beauty of it all. This was one of the greatest gifts that he passed on to me. I had the pleasure to enjoy our times in the woods and streams. I was there when he bagged his first and only turkey, a 20 plus pounder with an 8 inch beard. This happened two years ago when he was a young 88 years old. He said he wanted to put this in his baby book. He was 86 years old when he shot his last deer. He made me drag it out of the woods. I could fill this newspaper with hunting and fishing stories, but I will press on. He enjoyed life! He found humor in nearly every aspect of life. In the words of Jimmy Buffet, Pop “only grew older, he never grew up.” He was a joy to be with right up until his final breath. Pop rarely said a bad word about anybody or anything. All who knew him would agree. He always made people laugh. Pop like to drink beer. People would often ask him the secret to his longevity. He always stated, “Raw turnips and beer.” Gift giving during holidays, birthdays, and any other special occasion was always easy, as we called it, “the exchanging of the beers.” We would always give each other a case of beer and a few lottery scratch offs. Many times, the same beer…we would simply laugh. He loved to play golf! Pop was a member of the course in Buckhorn, The Links at Hemlock Creek. He golfed three days a week almost until the month of his passing. In 2000, Pop had a hole in one on hole #6 at Willow Run. He will be sorely missed by his golfing buddies, especially Gary. Surviving are his three children, myself, Larry Crawford and my wife Susan of Port Trevorton, his daughter Linda Rockwell of Bloomsburg, and Polly Heimbach and husband Mike of Riverside. Also surviving are five grandchildren, Megan MacLelland of Pittsburgh, Joshua and Sarah Crawford of San Antonio Texas, Carly Heimbach and her fiancé Wes Yeich of Lincoln University, Pa. and Brycen Heimbach of Riverside. Lastly Pop has four surviving great grandchildren, Clayton, Julia, and Scarlett Maclelland, and Ellie Heimbach. This was just a small snapshot of Pops life. I know he is in heaven with Mom. I also am sure he already made God laugh as he did others here on earth. He taught me so much about how to enjoy life. I will miss him dearly. A private burial will be held in New Rosemont Cemetery, Espy. The Allen Funeral Home, Inc., 745 Market at Eighth Streets, Bloomsburg is honored to be serving the Crawford family. Memorial contributions in Frank's name are suggested to: Geisinger Home Health and Hospice, 74 Schoolhouse Road, Suite, 104, Danville, PA 17821.

My Dad, Frank G. Crawford, age 90, of Bloomsburg passed away peacefully in our home on Crawford Mountain on Tuesday, 11 August 2020 at 12:30 AM. I&#8217;m Larry, his son, and will proudly let you know a little about my Dad.... View Obituary & Service Information

The family of Frank G. Crawford created this Life Tributes page to make it easy to share your memories.